A large crowd gathers at a Bucks County Community College campus for a congressional debate on Thursday, Oct. 25, 2018.

The race is getting national attention. Here are three things to know about the debate 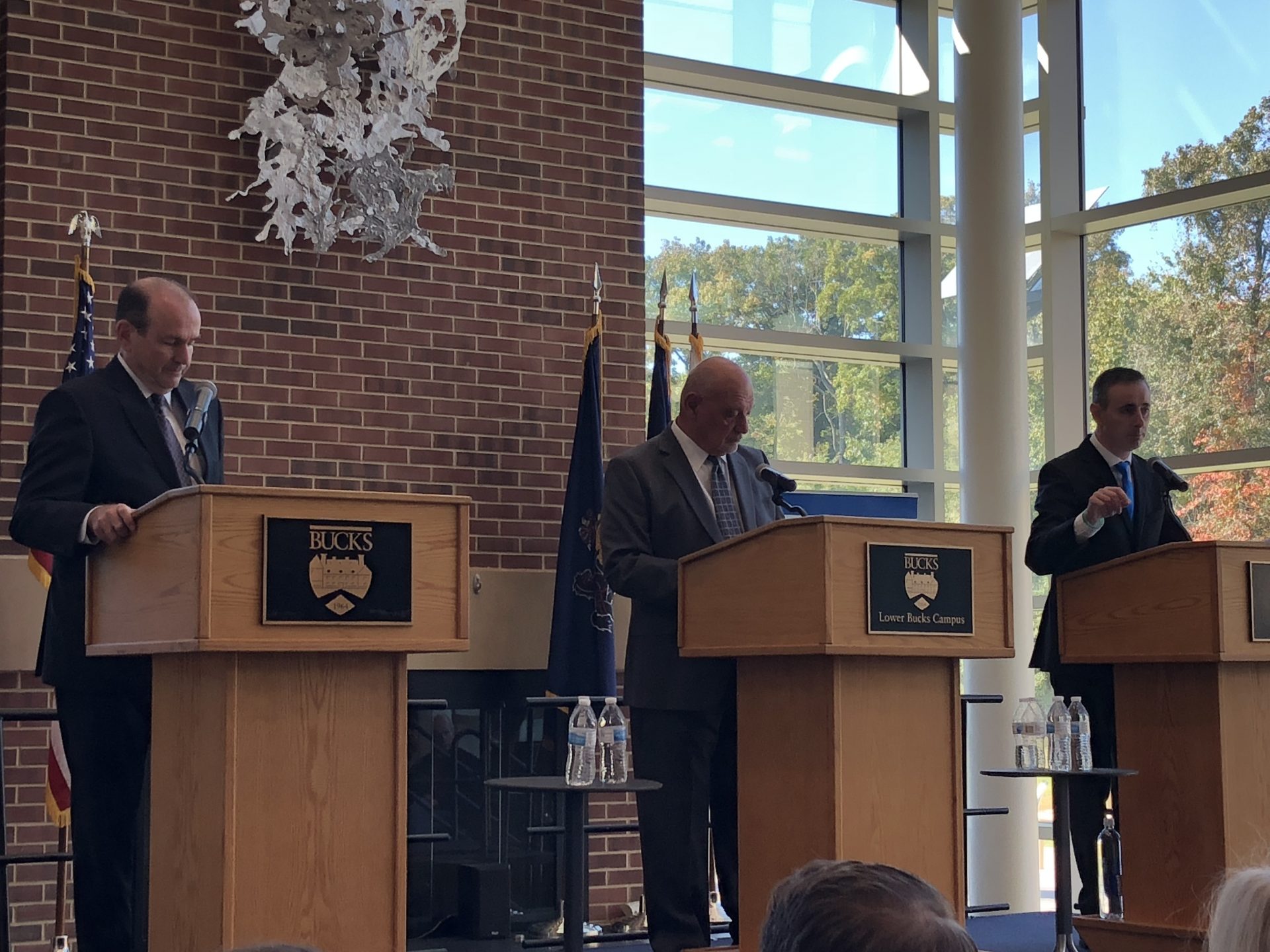 “Scott, I’m hearing you throw the word Republican out,” Fitzpatrick told his challenger. “Do your best to try to keep party labels out of the debate, because really it’s important. OK?”

The comments prompted some jeers from the crowd at a Bucks County Community College campus Thursday afternoon.

And the comments summarize the approach Fitzpatrick, a Republican incumbent first elected in 2016, took during the debate. He repeatedly portrayed himself as an independent voice in Congress, the kind of moderate who has been endorsed by both union and business groups.

“Please start holding President Trump accountable,” Wallace said. “If you won’t do it, the Democrats will.”

The two are competing for a suburban Philadelphia district that includes all of Bucks County and part of Montgomery County. The race is shaping up to be key in the battle for the U.S. House.

Trump lost both counties in 2016, and the race is considered a toss-up. Fitzpatrick is a former FBI agent and federal prosecutor. Wallace worked as an attorney in the U.S. Senate and then spent many years leading his family’s foundation.

Here are three things to know about the debate.

1. Who will lead the House?

Fitzpatrick accused Wallace of being “obsessed” with Ryan, the Republican speaker.

Wallace repeatedly linked Fitzpatrick with Ryan, who is not seeking re-election to Congress this year. Fitzpatrick voted for Ryan as speaker in 2017.

Wallace said bipartisan ideas that Fitzpatrick pointed to won’t come up for votes under Republican leadership rules, such as only bringing a bill to the floor if a majority of Republicans support it.

Fitzpatrick pointed to his membership in the Problem Solvers Caucus and a commitment members have made to not vote for any speaker unless he or she agrees to certain rule changes. Fitzpatrick said if the number of Problem Solver members increases from 48 to 60, “we become essentially the new governing majority in Congress.”

After the debate, Wallace said he hasn’t decided whether he would vote for House Democratic Leader Nancy Pelosi for speaker.

“I’m going to wait and see who’s running, and what kind of promises they make about getting us back to regular order,” Wallace said.

Fitzpatrick voted against efforts to repeal the 2010 Affordable Care Act. But Wallace criticized him over his support of the 2017 tax reform bill, which will effectively eliminate the individual mandate penalty a person has to pay for not purchasing health care.

“It removes 13 million people from the insurance pool and drives up premium costs for everybody else,” Wallace said.

He said the elimination of the individual mandate is a key part of a lawsuit that has put the entire Affordable Care Act, including protections for people with pre-existing conditions, in jeopardy.

Fitzpatrick defended himself, saying the old individual mandate a was “poverty tax” and wasn’t working.

“Ten years after the passage of the ACA, 30 million people were still uninsured,” Fitzpatrick said. “And 80 percent of the people that pay that mandate earn less than $50,000 a year.”

At a different recent debate, another word — not Republican — got a lot of attention.

Wallace cursed during a debate at a synagogue on Sunday, saying the f-word.

Fitzpatrick alluded to the comment Thursday. He talked about the importance of civility “and not cursing at each other during debates.”

Wallace didn’t directly respond to that criticism during Thursday’s debate.

But he told a PA Post reporter afterward: “Sometimes the issues get the best of me, and I deeply apologize for offending people in the audience. My utterance was under my breath, I thought, but I apologize.”

Still, he suggested that there’s been fake outage over the issue. Fitzpatrick’s campaign has put out an ad, criticizing Wallace over the cursing, calling the Democratic challenger an “unhinged, out-of-control” partisan.

Wallace’s response to that ad?

“Look, have you ever heard some of the stuff that Donald Trump says? Give me a break,” Wallace said. “Spare me the fake, the crocodile tears.”

Smart Talk: Voter registration increasing for both parties and independents