About half of frequent emergency department patients have a mental health diagnosis, according to a recent Journal of the American Medical Association report. Across the country, emergency rooms are often where people go when they’re having a mental health crisis.

“A lot of times people don’t know where to turn, but they know if they go to their local ER that they’re going to get people who are going to show care to them and are going to point them in the right direction,” said Kenneth “KC” Johnson at WellSpan Good Samaritan hospital in Lebanon.

The health care industry term for this is “psychiatric boarding”— providing help and a place to stay for someone who may be suicidal, psychotic or experiencing some other acute behavioral health condition.

Johnson said that the demand for mental health services in the emergency room is increasing, so much so that people with mental health issues are spending more time in the ER than they should. The problem is that there aren’t enough beds at inpatient mental health facilities. That leads to long wait times, which means that people aren’t getting the care they need right away.

That’s led some emergency rooms to increase the mental health care they can provide. In February, Good Samaritan set up a behavioral health unit. It’s connected to the emergency department, but it’s a separate ward with five rooms for people having primarily behavioral health issues rather than medical conditions that would require the kind of equipment you’d find in the ER. 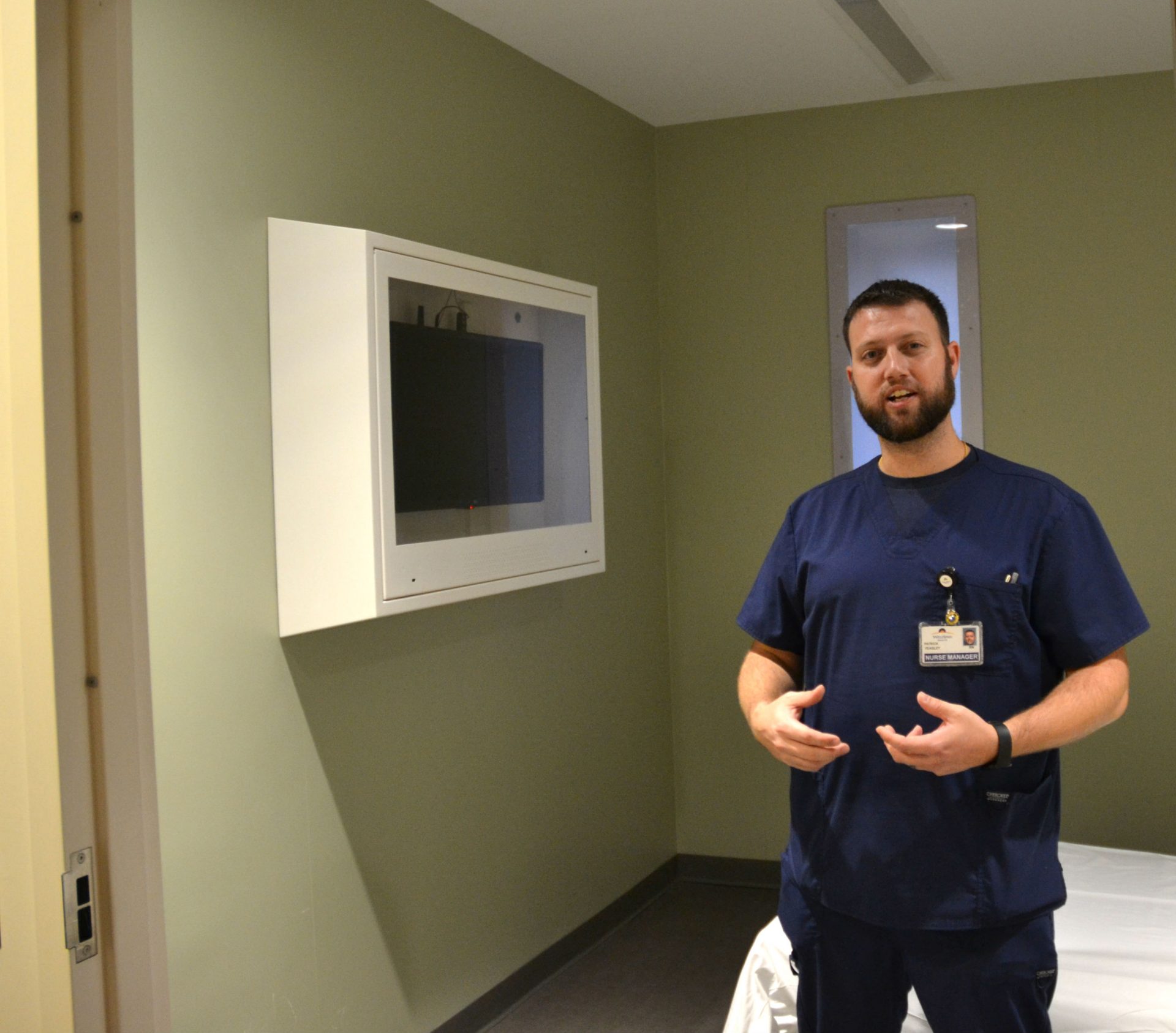 WellSpan Good Samaritan nurse manager Patrick Yeagley stands inside a room in the behavioral health unit. WellSpan set up the unit in February 2018, aiming to improve care for people who may be having an acute mental health crisis.

Johnson is director of access and crisis intervention at WellSpan Philhaven, which provides mental health services in several counties and works with affiliated ERs like the one at Good Samaritan. In Lebanon County, Philhaven has five main locations for outpatient services and a 103-bed inpatient location where, he said, people typically stay for a week or longer.

Most days, every one of those beds is full, Johnson said. That’s just one part of a mental health care system that is experiencing a lot more demand than it has supply.

People come to the emergency department in crisis, but the challenge isn’t just getting them stabilized, Johnson said. For emergency rooms in places like Lebanon County, one of the biggest challenges is connecting people with the next place where they can go for inpatient care or partial hospitalization.

“Some patients, who are difficult to place, have been here for a week or more,” he said.

That can have serious consequences. Patients who are stuck too long in an emergency department can end up getting frustrated and losing hope. Their symptoms can get worse. In rare cases, patients have lashed out at hospital staff and had to be restrained.

He said it’s just one part of a widespread problem: Not enough resources for behavioral health services.

There’s a lack of inpatient resources across much of the region, said Jessica Creter, deputy director at Lebanon County’s mental health and intellectual disabilities program.

For Lebanon County, part of that has to do with the way the ongoing closure of Pennsylvania’s state mental health facilities is playing out, she said.

Each county is designated a state hospital that it should send people to. In nearby Dauphin County, that was Harrisburg State Hospital, which closed in 2006. Since then, Dauphin County has received funding for community programs — currently about $11 million.

“We are extremely under-funded. We should have been pouring money into crisis for years, but when you don’t have it, you can’t give it.”

Lebanon County can send up to 29 people to Wernersville State Hospital in Berks County, Creter noted, and that’s a resource that Dauphin County doesn’t have. However, those are long-term spots that don’t frequently open up — leaving people with serious mental illnesses waiting for a place to receive care.

It can be even harder to find a bed for someone who has both mental health needs and an intellectual disability, as well as people who are known to be difficult to work with, Creter said.

“Suppose you have somebody in the emergency room in need of psychiatric care, and they have some behavior problems—well, good luck,” she said. “You’re not going to find anybody who’s going to want to take them.” 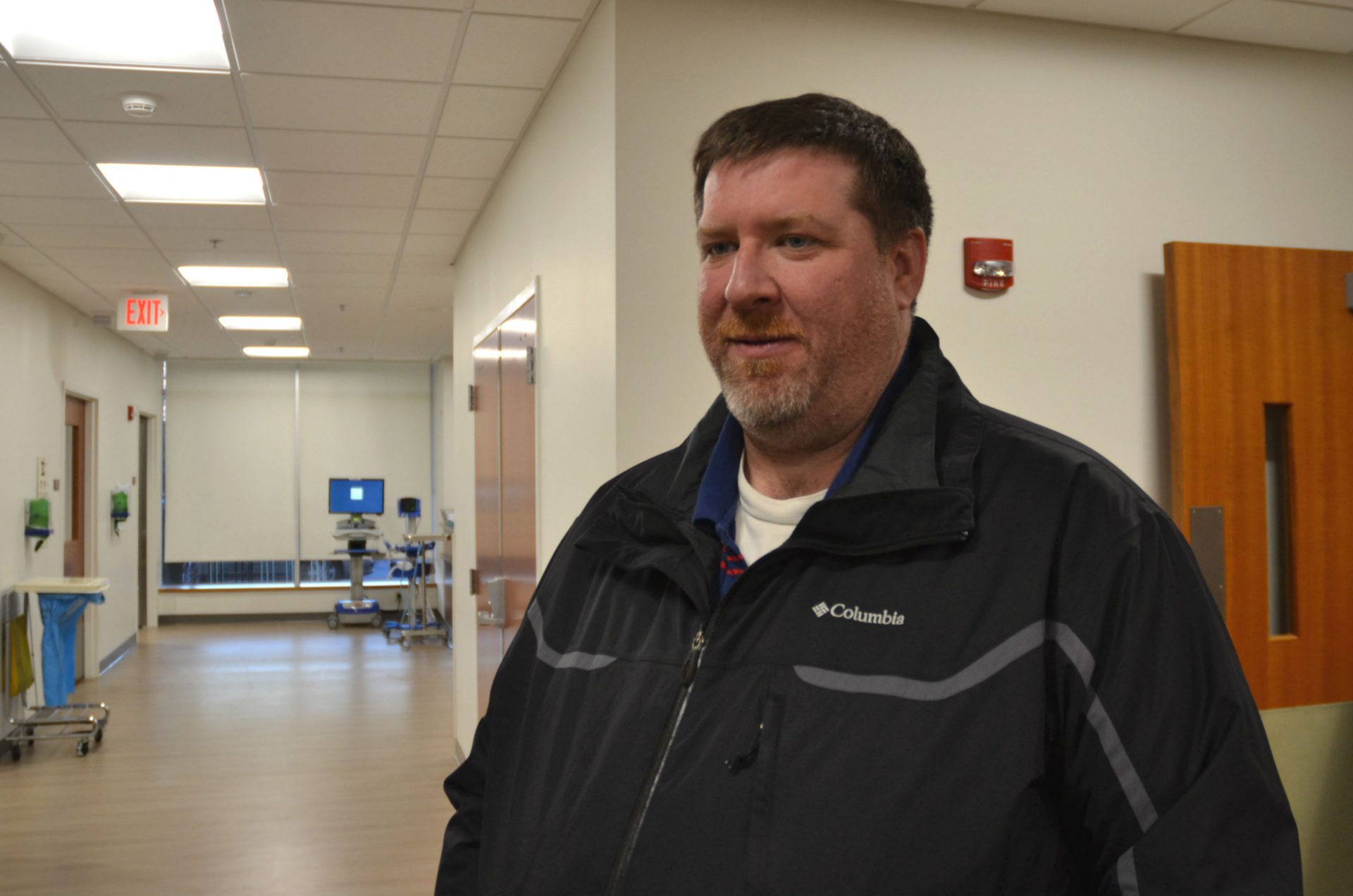 In September, Geisinger Holy Spirit spokeswoman Lori Moran said that the decision was “difficult but necessary.”

“There is a lack of available psychiatry treatment beds in the region, and we’ve seen a steady increase in the number of patients who come to our emergency department (ED) in need of short-term crisis stabilization,” Moran said in an email. Holy Spirit converted those extended acute care beds into “acute care behavioral health beds” to better respond to that need.

Moran noted that Holy Spirit’s increase in patients seeking behavioral care at the emergency department is consistent with national trends. She pointed to a number of factors, including lack of adequate community resources, less access to treatment services and long waiting lists. In addition, there’s been a surge in people coming to the ER with opioid addiction, and sometimes those patients also have an untreated mental illness.

“Many patients with mental illness are too sick to hold regular employment and may not have a consistent source of insurance coverage,” Moran said. “Many of our crisis admissions are centered around a lapse in insurance coverage. For example, if a patient stops treatments and runs out of medication, their illness isn’t controlled, and they come to the ED for treatment.”

More: People with serious mental illnesses are waiting months, sometimes ‘a year or more,’ to get treatment

There, the windows are frosted so that light gets in, but you can’t see out. Each room has a TV, but those TVs are locked in boxes to prevent access to cables. Beds and chairs weigh hundreds of pounds, making them virtually impossible to pick up and throw. There is a notable lack of sharp edges. There’s even a reason why there aren’t traditional handles on doors.

“We call it ligature risk,” Yeagley said. “We’re trying to avoid places where people can tie off to hang themselves or hurt themselves.”

The ward has its own dedicated staff, and also receives support from nurses and physicians in the ER, Yeagley said.

Johnson said he and his colleagues are doing the best they can with the resources they have, but they need more beds to place people in after they leave Good Samaritan.

“As we’ve continued to see society change, and we’ve realized we need to put more funding into behavioral health, we’re just not catching up to it. And again, the need is rising.”

As a note of disclosure, Transforming Health receives financial support from WellSpan Health.