A large flare burns off fuel at Philadelphia Energy Solutions refinery while firefighters battle a fire there. The wind carried the black smoke toward residential areas of South Philadelphia.

Philadelphia officials to convene working group on the PES refinery fire, while residents rally to shut the plant down 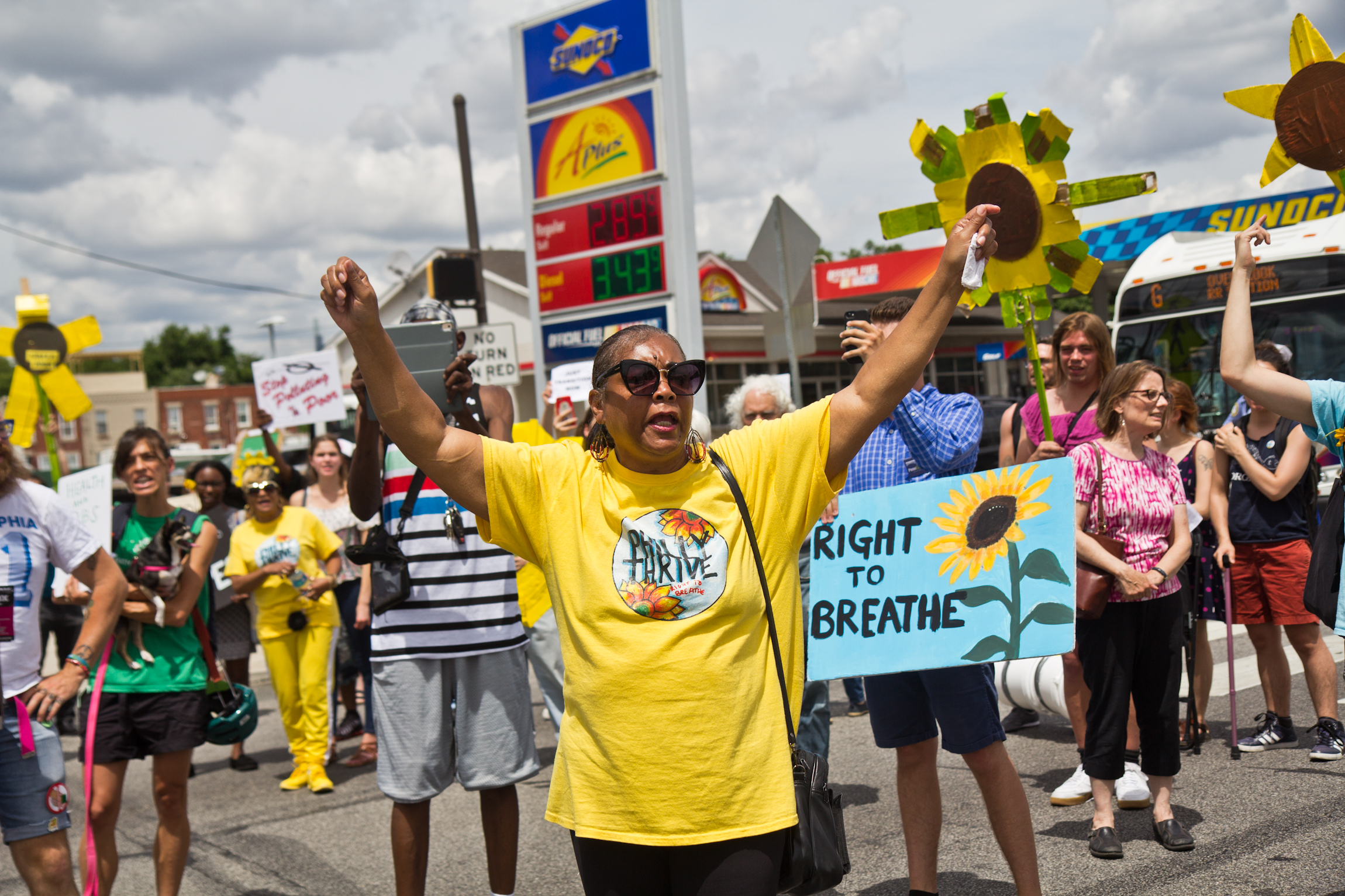 Sylvia Bennett, a member of Philly Thrive, raises her arms at a protest outside Philadelphia’s PES refinery. (Kimberly Paynter/WHYY)

Philadelphia, state and federal officials gathered Tuesday to assure city residents that the refinery explosion and fire that occurred Friday at the Philadelphia Energy Solutions complex did not result in any threats to the public health.

The city plans to form a working group that would include officials, residents, environmentalists, workers, and PES management to address issues at the plant. Managing Director Brian Abernathy said a public meeting will take place at the end of July.

“This incident sharpened a number of questions around the refinery,” Abernathy said. “Is the refinery safe? Does PES have appropriate measures in place to prevent a catastrophic failure? Was our response and the response of PES adequate and appropriate?”

Abernathy said fears that the dangerous chemical hydrogen fluoride could have been released will also be addressed, as well as the financial health of the plant. PES emerged from bankruptcy last year, but it has struggled to compete due in part to changing economics of the source of its crude oil from the Bakken Shale fields of North Dakota and the requirements of the Renewable Fuel Standards.

The explosion of liquefied petroleum gas at the PES refinery sent a fireball into the air and black smoke billowing across the region.

But Philadelphia’s deputy health commissioner, Caroline Johnson, said the windy day helped clear the air of any pollutants that could have affected city residents.

“Based on aggressive sampling of air quality in the region of PES, we found nothing of concern, and we see no evidence that there’s been an impact on the health of the public in Philadelphia.”

Johnson said she could not speak about the potential impact in other parts of the region. Officials from the Pennsylvania Department of Environmental Protection, the federal Bureau of Alcohol, Tobacco and Firearms, and the city’s Fire Commissioner Adam Thiel agreed the fire and its aftermath did not pose a public-health threat.

Johnson said inspectors with the city’s Air Management Service have conducted a number of tests both at its monitoring stations, as well as bottling air in the vicinity of the refinery to test for 61 potential pollutants. 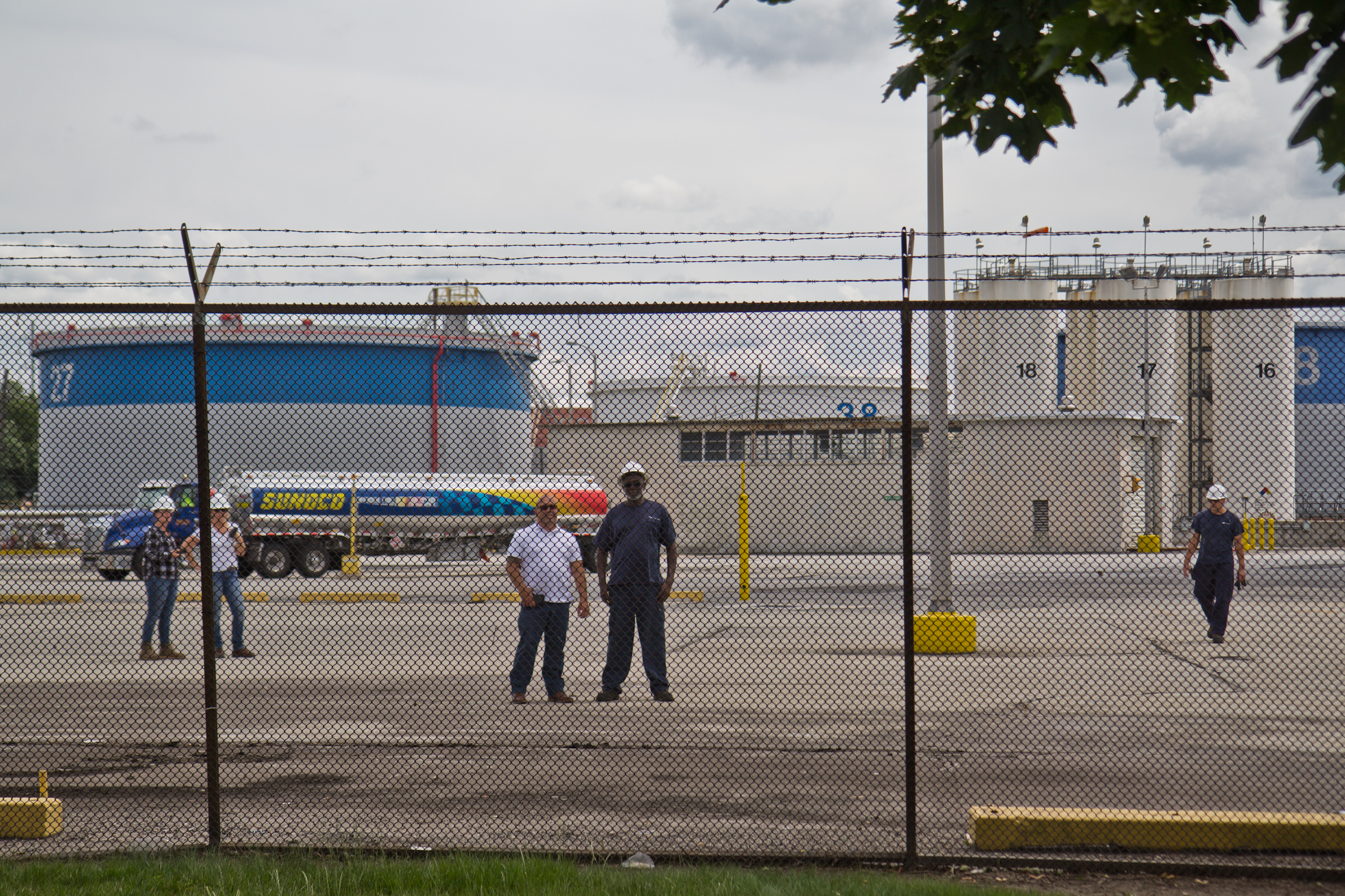 Refinery workers watch protestors outside the PES refinery Tuesday. The Girard Point refinery is offline as the investigation into the fire continues. (Kimberly Paynter/WHYY)

Missing from the news conference was a representative from PES. Company spokeswoman Cherice Corley released a statement Tuesday afternoon saying that a thorough investigation was continuing and that there was no new information to share.

Mayor Jim Kenney promised residents and workers at the refinery that the city is committed to ensuring the safe operation of the plant.

“I do believe that there is room for improvement,” he said, “both in the operation of the refinery and in the communications to residents.”

Residents have been calling for the refinery to be shut down, citing decades of poor air quality and lack of response from the company.

Although Friday’s fire may not have resulted in poor air quality, the refinery is the largest single source of air pollutants and greenhouse-gas emissions in the city. The plant released 3,218,080 metric tons of carbon dioxide or its equivalent in 2017. Over the past five years, PES has paid $649,417 in penalties for violating the Clean Air Act, $150,000 for violations related to the Clean Water Act, and $100,000 for hazardous-waste issues.

In the previous three years, the site has been cited for Clean Air Act violations in nine of 12 quarters. It has not been in compliance with the Clean Water Act for any of the past 12 quarters. Some of the releases listed under the Toxic Release Inventory for 2017 include volatile organic compounds such as toluene and benzene, as well as ammonia, lead compounds, and sulfuric acid.

Fire Commissioner Thiel said his department continues to have a strong presence at the refinery during the investigation, which he said “will take a very long time.”

Along with the city’s fire marshal, DEP and ATF, the Chemical Safety Board and the Occupational Safety and Health Administration are investigating.

On Tuesday afternoon, about 40 protesters from grassroots community groups gathered in front of the refinery, at one point spanning the width of Passyunk Avenue and bringing traffic to a standstill as they shouted their demands.

South Philadelphia resident Sylvia Bennett, a member of Philly Thrive, which organized the protest, was among them. She felt her bed shake when the explosion occurred around 4 a.m. Friday and thought she was hearing firecrackers. She said she and her neighbors are fed up with the health risks the refinery brings to her neighborhood.

“Enough is enough,” Bennett said. “I want them to shut it down or change [from] fossil fuel.”

Ryan O’Callaghan, president of United Steelworkers Local 10-1, said calls to eliminate the refinery were rash and did not account for the 1,000 or so workers the refinery employs.

“Those who are calling for the refinery to be shut down, I don’t think they realize the amount of people that rely on this refinery’s operations for part or all of their salary,” O’Callaghan said.

As for the safety of the facility, O’Callaghan said that he wants any repairs to make the work environment safer, but that he hasn’t felt at risk while on the job.

“If we felt it was unsafe, we wouldn’t be here,” he said. “Our members are in the refinery every day. We don’t want anything to get out of the pipes or anything like that. We’re the first line.”

Some at the protest acknowledged the need for a thoughtful transition at the refinery that would account for those who rely on it for their livelihood.

“Where are the people who work here now going to work? How are they going to have good jobs?” said West Philadelphia resident Noah Winer, who attended the protest with his wife, Sarah, and 3-month-old son, Amos.

Winer said the impact of the explosion could have been far worse, which makes him concerned for the safety of his son and other children who live closer to the refinery.

Emily Pontecorvo contributed to this report.

My paycheck or my health; warehouse workers see themselves as reluctant heroes of coronavirus pandemic