‘They’re bursting at the seams’: As Hahnemann closes labor unit, concerns over lack of maternity wards in Philly

More than 800 pregnant patients will have to find somewhere other than Hahnemann University Hospital to have their babies.

A letter sent by the Drexel University College of Medicine’s Department of Obstetrics and Gynecology this week informed the 819 patients that, as of Friday, Hahnemann — Drexel’s primary teaching hospital — would no longer perform non-emergency surgeries and procedures. That includes childbirth.

At 7 a.m. Friday, Hahnemann’s labor and delivery unit will no longer take patients — and it will close the unit once the last baby is delivered. The postpartum unit will stay open for the two to three days thereafter that patients are with their babies.

Area nurses, midwives and other medical providers said the loss of a hospital like Hahnemann that takes many low-income, Medicaid-dependent patients is unfathomable. It may not have had the city’s biggest labor and delivery unit — in 2017, of the more than 21,000 babies born in Philadelphia, just 1,765 were born at Hahnemann. But according to a representative of Philadelphia’s Department of Public Health, about half the women who deliver at Hahnemann used the city’s free medical clinics prior to giving birth.

Ellen Wolf, a nurse on Hahnemann’s labor and delivery floor, said some of the pregnant patients who come in are at high-risk of complications as well. Two-thirds of patients at Hahnemann are dependent on government health insurance like Medicaid. Sometimes, she said, they haven’t received any prenatal care and come to Hahnemann when they’re in labor, or arrive at the Center City hospital after receiving care elsewhere.

Wolf said there’s been an obstetrics crisis in Philadelphia for quite a long time now. Between 1997 and 2012, 13 of the 19 hospitals in the city closed their obstetrics units for a number of reasons.

As community hospitals were bought by for-profit health care systems, labor and delivery units were seen as one of the least profitable departments because of issues such as high medical malpractice premiums and low reimbursement for maternity care.

Prior to working at Hahnemann, Wolf worked at Chestnut Hill Hospital, which closed its labor and delivery unit in 2008.

“It’s going to add to the public-health crisis that’s already there with the other hospitals,” Wolf said. “They’re bursting at the seams with people coming in, with pregnant women who are either high-risk or not even high-risk. I’m really worried about what’s going to happen to these poor people who are not going to know where to go for their care.”

Drexel’s letter to maternity patients, dated Monday, says: “If you are due to give birth in July and August, we will contact you by phone to help arrange for your admission to another Philadelphia hospital. Currently, Drexel Obstetrics and Gynecology is working closely with Thomas Jefferson, Center City. However, you may deliver your baby in any hospital you choose, and we will coordinate your care with any hospital you designate.”

“If you are scheduled for gynecologic surgery in July and August, we will contact you by phone to arrange for our physicians to perform your surgery at another location.”

A Jefferson representative said the health system was working to help Drexel’s obstetric providers gain the proper credentials, so they can provide care at Jefferson.

In late June, Hahnemann’s administration told employees that the hospital would close at the end of August. As operations there started winding down, Philadelphia Academic Health System, the hospital’s parent company, filed for Chapter 11 bankruptcy protection. A first hearing on the petition in U.S. Bankruptcy Court in Wilmington is scheduled for Thursday afternoon.

With the closure of Hahnemann’s labor and delivery unit Friday, about 140 nurses and eight midwives who work with mothers and their babies will be looking for jobs — and the city will be down to five hospitals that provide pregnancy and childbirth care. Those offering this type of care say the closure of the unit will only make health outcomes for pregnant people in Philadelphia worse. 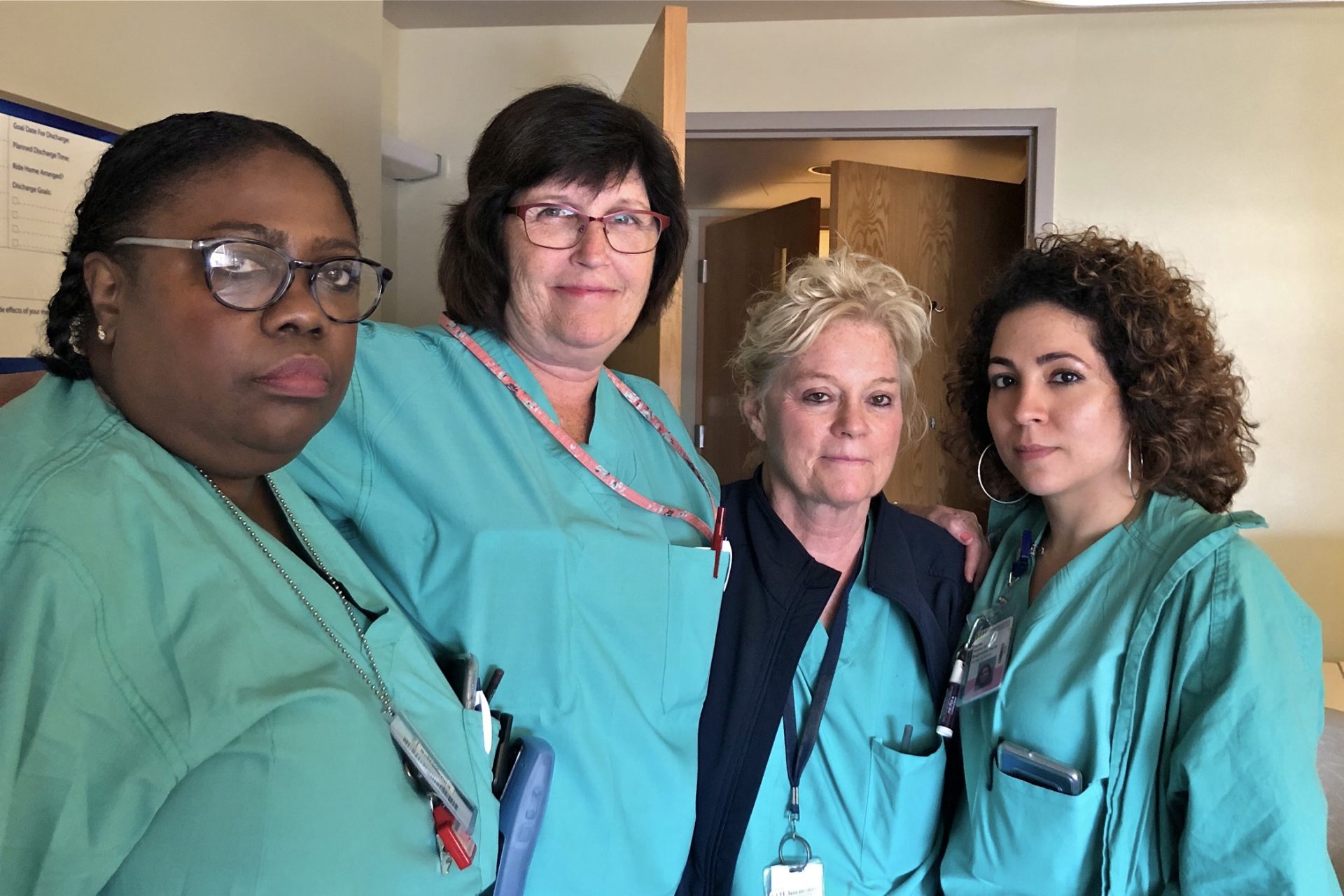 Nurses on the labor and delivery unit at Hahnemann, (from left) Lisa Myers, Claire Byrne, Ann Fitzsimmons, and Sasha Vazquez.

‘Where are they going to go?’

Lisa Myers has worked as a labor and delivery nurse for 31 years, with 20 of them at Hahnemann. This is the third time she’s gone through a unit closing — she worked at the City Avenue Hospital for Women and at Medical College of Pennsylvania Hospital before they were shuttered in the 1990s.

But this time is different, Myers said. It feels as if there are not many units left where she can work, and she worries how Hahnemann’s closure will affect pregnant patients who have grown to trust the patient-focused care there.

“They’re vulnerable, and when they come here they get great care from us,” Myers said. “The community is going to suffer immensely. Some people, all they know is Hahnemann, so where are they going to go?”

The labor unit at Hahnemann has an Aetna Elective Delivery Infant Safe Program Facility designation — which means it has guidelines in place to help prevent deliveries before 39 weeks. Hahnemann also has one of the lowest rates of cesarean section in Philadelphia, according to state Health Department data.

Bill McCool served as director for the University of Pennsylvania’s midwifery program for nearly 20 years. Prior to retiring last year, he was a midwife for over 30 years. In 2013, McCool co-published a research paper on the health impact of the increasing lack of maternity care options in Philadelphia.

“Any time a woman is pregnant and is going to deliver somewhere, a lot of the well-being of that pregnancy depends on the woman feeling confident … in the provider that she’s working with and the institution where she’s going to deliver in,” McCool said. “To have that rug pulled out from under you, especially when you’re at nine months of pregnancy, it’s a big deal.”

Prior to the closure of this labor and delivery unit, McCool said there was already a lack of accessibility to maternity care in certain sections of the city. The remaining hospitals that provide obstetrical care are mostly in Center City and University City. The northernmost hospital that offers obstetrical care is Einstein Medical Center on Broad Street.

“The whole Northeast part of Philadelphia, there is not a hospital that offers care for deliveries for miles,” he said. “What a lot of people do is they go out to the suburbs and try to find a place like Lankenau or the new Montgomery Einstein Hospital.”

For low-income pregnant patients in Philadelphia, getting to those hospitals for prenatal care and delivery can be nearly impossible, McCool said. He worked at the Dickens Center for Women’s Health at the Hospital of the University of Pennsylvania for 18 years, where many of his patients had to take two to three types of public transportation to get to their prenatal visits.

And of those remaining hospitals, McCool said, many are already at or near capacity on their labor and delivery units. To take on hundreds more women in need of pregnancy and maternity care would require the hospitals to add more beds.

“There’s just no place to put them,” he said. “I think any labor and delivery nurse or midwife you talk to will tell you stories of times when they’ve been so busy that people are laboring in the hallway. Hospitals have done a lot to try and prevent that from happening, but that’s definitely what’s going to be happening.”

Hahnemann as a safety-net hospital for home births

Another pregnancy-care concern resulting from Hahnemann’s closure is the loss of a major safety-net hospital for home-birth midwives in Philadelphia.

Asasiya Muhammad, a certified professional midwife and the owner of Inner Circle Midwifery, does home-birth deliveries throughout the city. Hahnemann is often her practice’s backup hospital, which means that in the event a client needs to have a C-section or has been laboring for too long, the mother would be transferred to see the attending physician at Hahnemann.

Hahnemann’s labor and delivery unit created “unofficial contracts,” where local midwives could come in and still be a support system for the mother, said Ellen Wolf, who works on the unit.

“A lot of times when a home-birth midwife comes to a hospital and they don’t have a relationship with any doctors there, it creates a lot of anxiety for the woman that’s having the baby, and the midwife as well,” Wolf said. “So this was a really great situation where they sort of had this prior knowledge that at least they were kind of familiar with the Hahnemann doctors, which made for a better situation for everyone all around.”

Muhammad found Hahnemann to be a good fit as her backup hospital because of its central location in the city, and because of its alignment with her own childbirth philosophies.

“When [midwives] know we have an open and transparent relationship with medical providers, when they are needed, it allows for a more respectful relationship with community midwives and the hospital staff,” Muhammad said. “But more importantly, [for] the families who chose home birth, so it doesn’t demonize them that if things don’t go as according to plan that they won’t be judged if they have to go into the medical system to get treated.”

When Muhammad heard the news that Hahnemann planned to close, she hoped that some entity would rescue the hospital and keep it open. Now she has to foster the kind of relationship she has with Hahnemann at other city hospitals.

Smart Talk: Involuntary commitment is a lifeline for some