Protesters advocating for Berks' closure in 2016, during Barack Obama's presidency.

Wolf maintains he cannot prove in court that families at the Berks Family Residential Center are in immediate danger. A group of academics says they are. 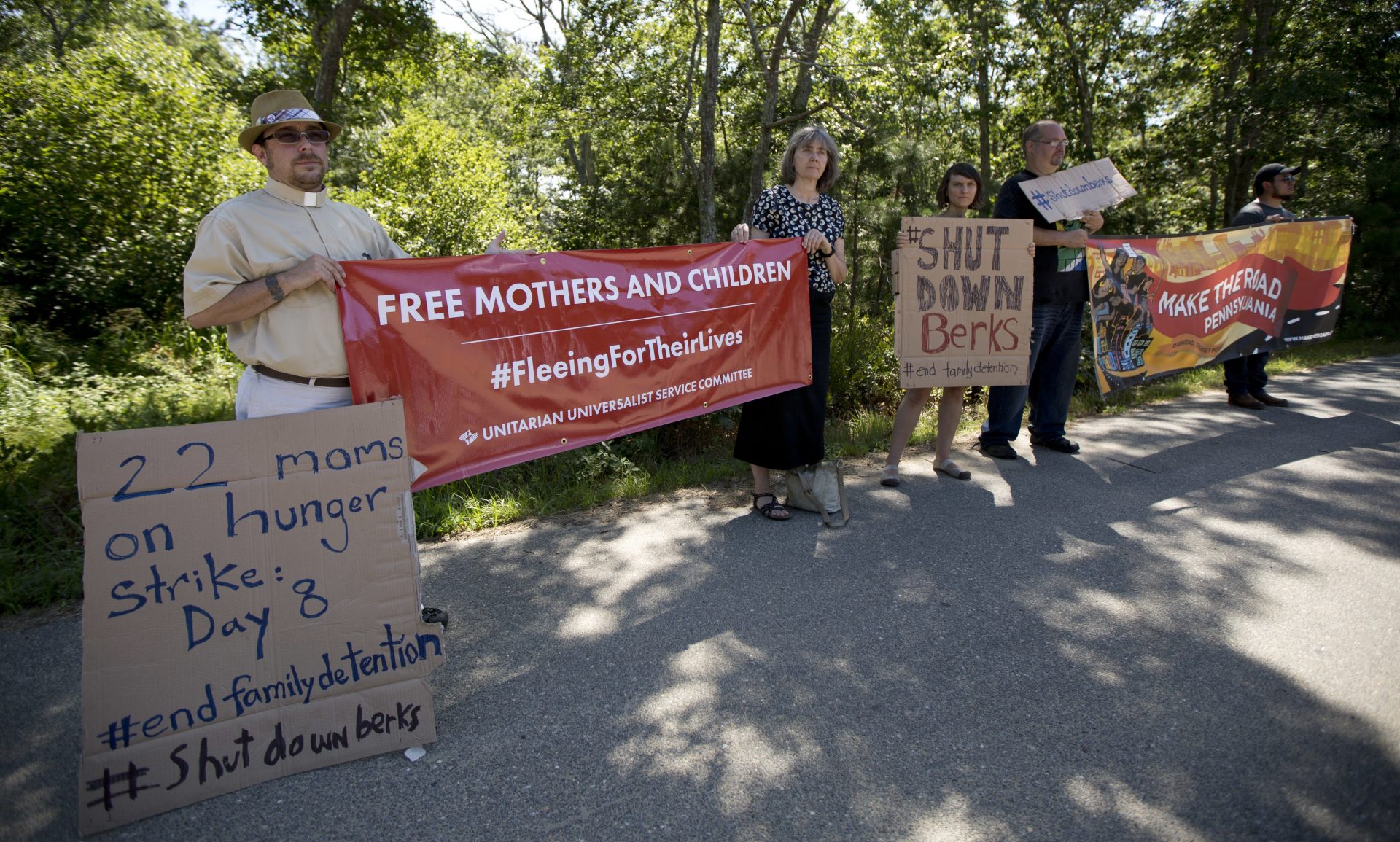 Protesters advocating for Berks’ closure in 2016, during Barack Obama’s presidency.

(Harrisburg) — A group of Carnegie Mellon psychologists is urging Pennsylvania leaders to close a controversial detention center for immigrant families, because they say it is damaging the physical and mental health of the children who are held there.

They argue that a preponderance of research shows detention harms children immediately and permanently. And they’re collecting signatures from their colleagues across the state for a letter that aims to push Democratic Gov. Tom Wolf to intervene by declaring the center unfit to house minors.

There is “no area of development that is spared by this kind of trauma,” said Anna Fisher, one of the psychologists. “Oftentimes, this trauma is lasting, and it impacts all aspects of one’s functioning and development. Social, cognitive development, language development, attention development.”

The Berks Family Residential Center is one of three U.S. facilities that holds undocumented families. With 96 beds, it is also the smallest, and the only one not in Texas.

Berks County runs the center through a contract with Immigration and Customs Enforcement, and is reimbursed by ICE for its work. The facility also has a state license which, in 2016, Wolf attempted to revoke. A state judge ordered it to be reinstated, however, and the issue has been mired in court since.

The Carnegie Mellon psychologists say they believe it is time for Wolf to use the one other tactic at his disposal: an emergency removal order.

Activists have been urging Wolf to do that for years.

The governor can invoke it if a facility in the state—even one not under his direct control—is found to present a clear and immediate danger to people in its custody.

The Human Services Code isn’t clear on what should happen to people after they are removed from a problematic facility.

In April, the state issued an emergency removal order to a reform school for boys after allegations that it had allowed staff to abuse students and covered it up. The boys were sent to other facilities within 30 days, and the school has since conducted mass layoffs. No children have been returned to the school.

The Wolf administration said even if it issues an ERO for Berks, it will have a new problem on its hands.

Asked to confirm this course of action, a spokesperson for ICE listed a number of services provided to detainees in the Berks facility, but did not answer the question.

Wolf opposes ICE’s family detention practices, and has said he would prefer detainees be housed in communities while they await immigration hearings. But he said besides the logistical issue of detainees remaining in ICE custody, he cannot issue an ERO because he would be unable to defend it in court.

The DHS spokesperson noted in the department’s statement that an ERO “can only be issued if inspectors find that conditions in the center are likely to cause immediate and serious danger to the life or health of children,” and the DHS has found those conditions don’t currently exist.

In response, the Carnegie Mellon professors cite a 2016 legal memo from Temple University’s Beasley School of law that found merit in the argument that children held at Berks are in danger.

“Berks has allowed chronic health problems to go untreated in the facility,” it said. “Further, the mental health of the detained families is put in danger because its mental health care professionals do not speak Spanish.”

A number of complaints related to inadequate health care at Berks have surfaced over the years. In one case, cited in a complaint by the American Immigration Lawyers Association, a toddler was allegedly told to drink water after vomiting blood.

The Berks facility was also accused of failing to protect a 19-year-old detainee from being raped by a staff member; he was convicted, and her lawsuit is ongoing.

However, the center defends its treatment of people being held there.

They added, “Comprehensive medical care is provided from the moment the families arrive and throughout their entire stay at the facility.”

Democratic Berks County Commissioner Kevin Barnhardt, who recently released a letter saying he supported shutting down the center because of the direction the federal government is taking with immigration enforcement, still defended its operations.

“Families are receiving medical, dental, and psychiatric care, most for the first time in their lives,” he wrote. “Children are being educated and the teachers ensure their progress….children are also provided educational trips and leisure activities.”

Fisher said even without taking the alleged and confirmed incidents at Berks into account, she and her colleagues believe detention is problematic.

“It’s a prison-like condition,” she said. “Even if it’s a nice prison. Even if you’re given crayons and there is nobody sexually abusing you, it still creates a situation where you don’t have self-advocacy. You can’t decide where you’re going to be and what you’re going to do…this is just incompatible with typical development.”

Fisher’s own research involves cognitive development of neurotypical children who don’t experience stress from things like detention or poverty.

But she is familiar with the literature on childhood trauma, she said, and added that psychologists, psychiatrists and pediatricians who specialize in that area would be “very well-positioned” to testify in court about the harms of family detention, if the situation came to that.

She emphasized that there is overwhelming consensus in the field saying detention is harmful to children.

“It’s as strong as professional consensus on climate change,” she said.

The American Academy of Pediatrics and the American Psychological Association have both strenuously opposed detention of children.

At this point, the Carnegie Mellon professors are still collecting signatures on their letter, and plan to send it to Wolf soon. A few days in, they have more than 100 signatures from psychologists and psychiatrists across the commonwealth.

The letter cites 69 separate studies, a collection Fisher said is not comprehensive.

This story has been updated to clarify that the Carnegie Mellon professors circulating the letter are all psychologists, not psychologists and psychiatrists.