Attorneys for Safehouse, the nonprofit that wants to open a supervised injection site in Kensington, faced off Thursday against federal prosecutors in U.S. District Court in Philadelphia.

The hearing, the second scheduled by Judge Gerald McHugh, was focused specifically on the language of what is known as the “crackhouse statute” in the federal Controlled Substances Act. The government contends that opening a place where people can inject opioids under medical supervision would violate that statute, which was added to the law in the 1980s, at the height of the crack epidemic. The statute makes it illegal to maintain a site for the purpose of using a controlled substance.

Safehouse has argued that the law does not apply because its main purpose is saving lives, not providing illegal drugs. 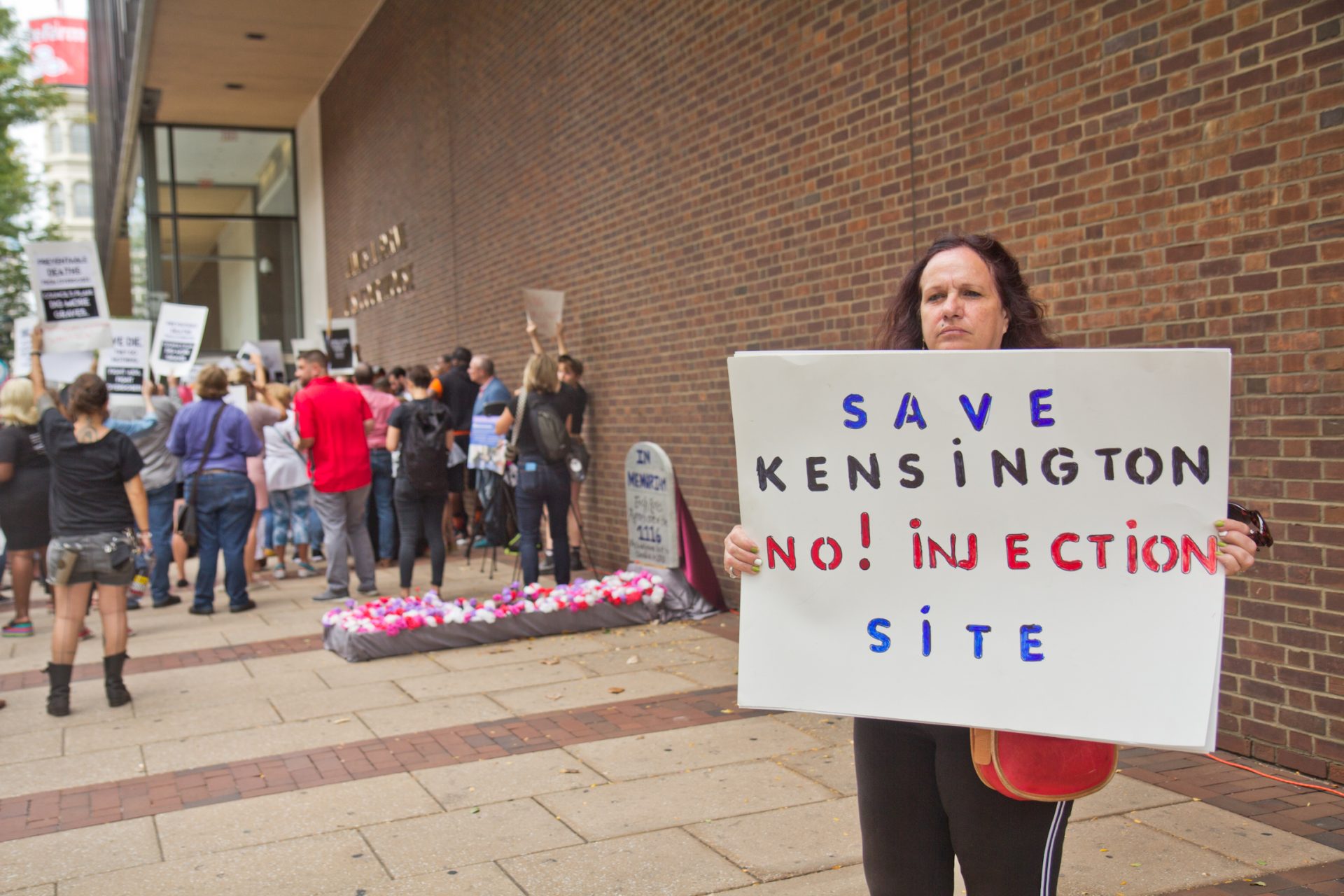 “Evangelist” Theresa is a block captain in the neighborhood where the Safehouse injection site is proposed. She was one of two counter protesters at a rally in support of the site. 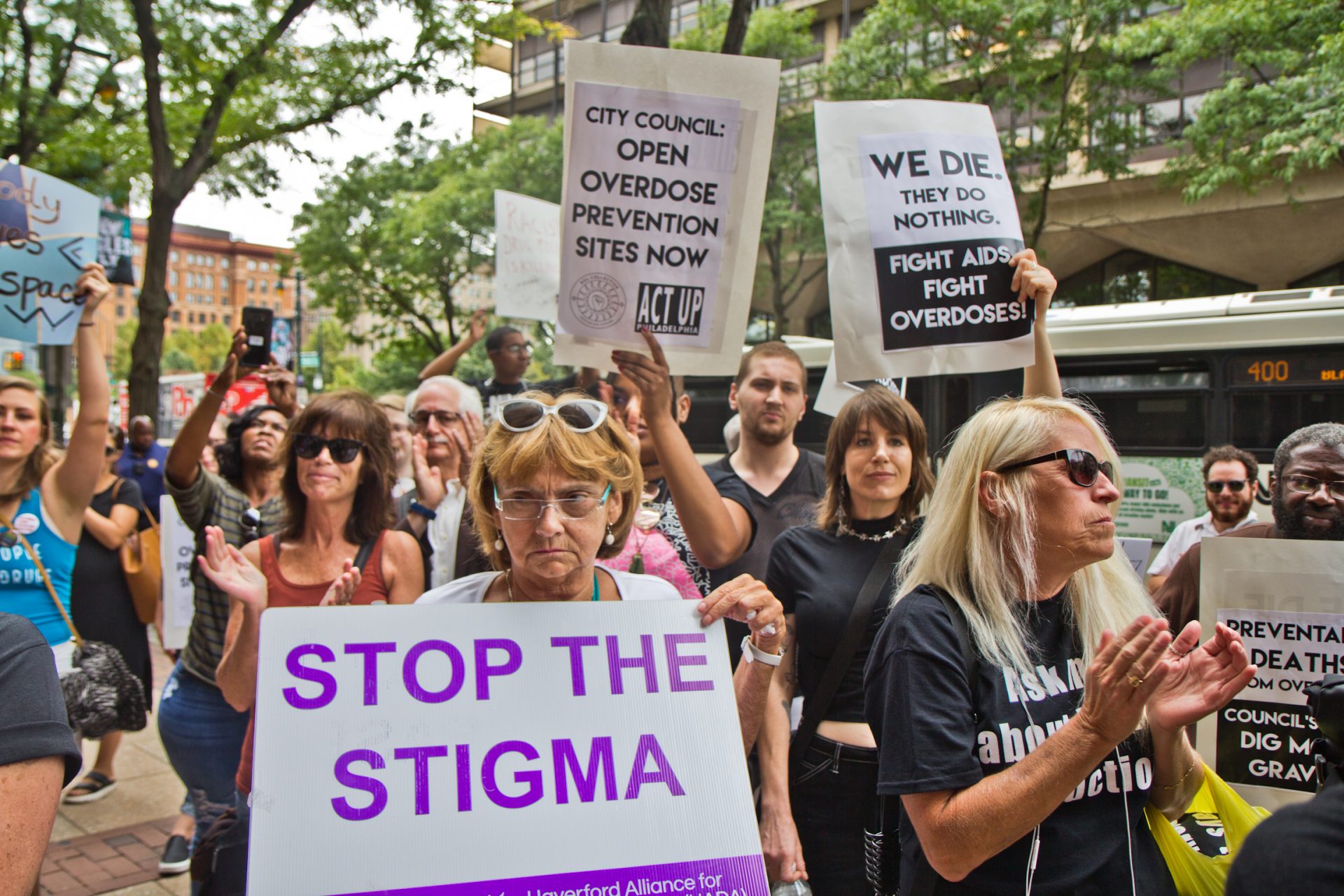 The road to this moment in court, generally considered to be the legal crux of the case, has been long.

Back in January 2018, Philadelphia officials announced they would support a supervised injection facility as one measure to combat the city’s opioid epidemic. Since then, various harm-reduction advocates and medical professionals have come together to form Safehouse, create a plan for its operations, and begin scouting a property from which to operate.

U.S. Attorney William McSwain sued the nonprofit in February to block it from opening. 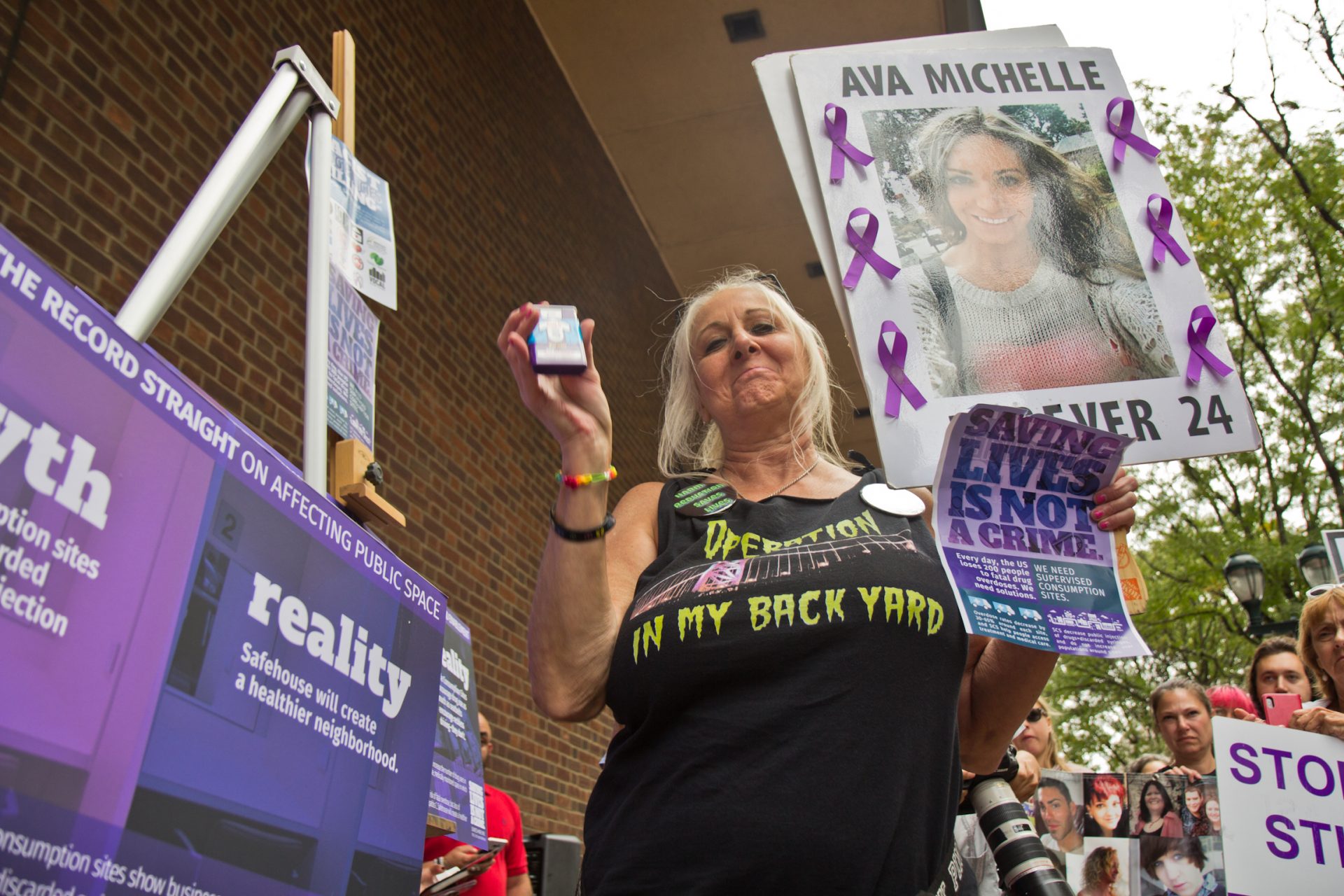 Deborah Howland lost her daughter to an opioid addiction in May of 2018.

In June, the Justice Department asked the judge to rule on the case based on the arguments that had already been submitted. McHugh then requested an evidentiary hearing to learn more about the nuts and bolts of how the facility would work, were it to open.

At that hearing in August, Safehouse’s legal team, led by Ilana H. Eisenstein, explained that Safehouse would not provide drugs, but that people could bring their own to inject while medical professionals stood by with naloxone, the overdose reversal drug. The team argued that Safehouse would also be an opportunity for people to access treatment, if they were ready.

McHugh said the testimony from the August hearing should not be taken into account for Thursday’s hearing, whose scope was limited to the interpretation of the Controlled Substances Act.

The judge was concerned about whether Congress had conceived of a site like this when crafting the statute.

He asked McSwain if he could point to any legislative evidence that showed members of Congress had thought about supervised injection sites when they wrote the statute in the 1980s, or again when they amended it in 2003. McSwain could not.

“Do you think that Congress would want to send volunteer nurses and doctors to prison?” asked former Philadelphia Mayor and Pennsylvania Governor Ed Rendell, who is on Safehouse’s board, after the hearing. “Do you think that’s a legitimate result of this statute? Of course not, no one could have ever contemplated that, ever!”

Rendell said he had spoken with U.S. Sen. Patrick Leahy of Vermont, who helped write the statute, and that he told him that the authors never thought about supervised injection sites when they were constructing the statute. 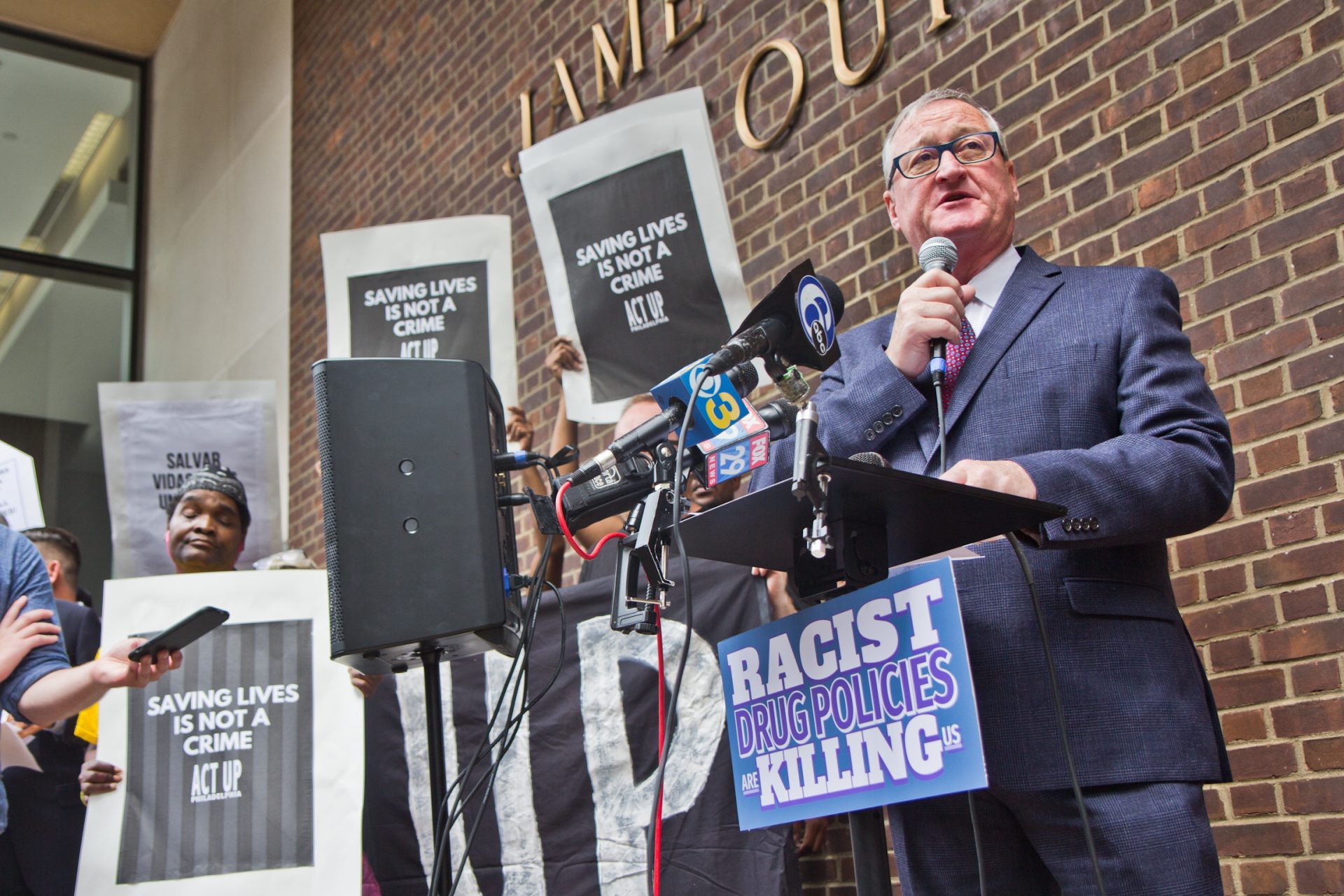 Much of the debate revolved around interpreting the word “purpose.” The statute makes it illegal for anyone to “knowingly open … use or maintain any place … for the purpose of … using any controlled substance.”

The government says it’s simple: Safehouse’s purpose is for people to use drugs.  McSwain conceded it will also provide access to treatment, but so does Prevention Point, the city’s only syringe exchange. Effectively, the only difference between Safehouse and what’s already going on would be that people could inject drugs at Safehouse, which is prohibited by the statute, he argued.

“If this opens up, the whole point of it existing is for addicts to come and use drugs,” McSwain said.

Safehouse said its purpose is to keep those at risk of overdose safe from dying.

McSwain conceded that if Safehouse were to offer the medical support without opening up a space specifically for people to use drugs, the statute would not apply.

“If Safehouse pulled an emergency truck up to the park where people are shooting up, I don’t think [the statute] would reach that. If they had people come into the unit, that would be different,” he said. Mobile units and tents in parks are supervised injection models that other cities have implemented.

Safehouse has also said it hasn’t ruled out the idea that it might incorporate a supervised injection site into another medical facility or community center, which would indisputably have other purposes.

McSwain ultimately argued that Safehouse had come to the “steps of the wrong institution,” and that if it wanted to change the law, it should appeal to Congress. He accused Safehouse’s board of hubris, pointing to Safehouse president Jose Benitez’s testimony at August’s evidentiary hearing, where he acknowledged that they hadn’t tried to open a site until now because they feared the federal government would think it was illegal and might shut it down. 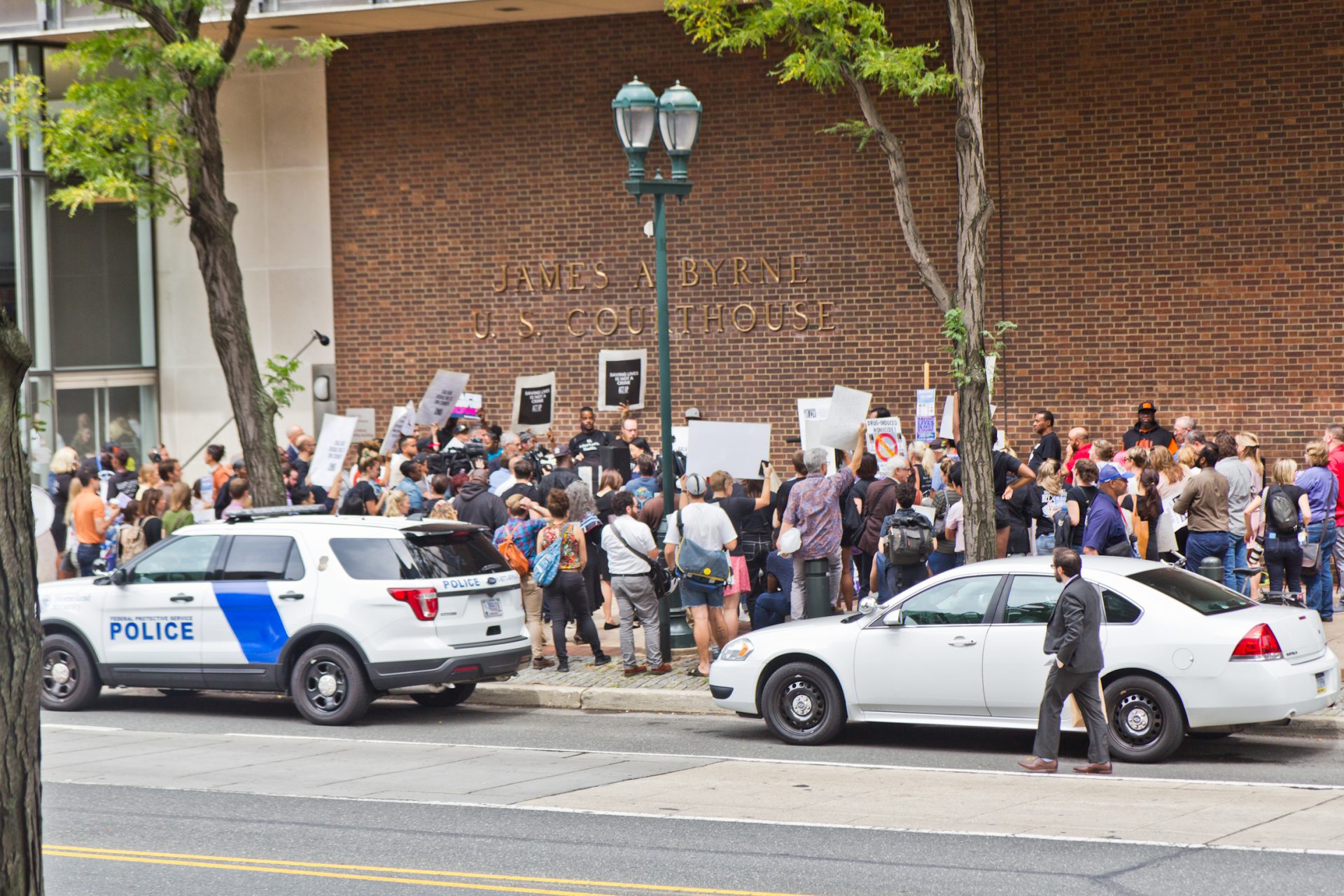 “What’s changed?” asked McSwain. “Safehouse just got to the point where they thought they knew better.”

“Either that, or it’s the death toll,” McHugh replied.

More than 1,100 people died of overdoses in Philadelphia in 2018 — down about 100 from the year before. That’s an average of three people a day, triple the city’s homicide rate. The highest concentration of overdoses is in Kensington, where Safehouse has proposed to open.

While he came with questions for both sides, McHugh pressed McSwain harder and more aggressively than he did Eisenstein. The Justice Department’s request for a motion on the pleadings is still pending. The judge could decide he now has enough information to issue a ruling, or he might say he needs to hear more arguments, see more evidence, or move on to a full-fledged trial.

Safehouse’s legal team said that if the judge ruled in its favor, it might request a preliminary injunction in the form of relief to allow the facility to open early.

“We recognize there’s a crisis here,” said Ronda Goldfien, Safehouse’s vice president and a member of its legal team. “The goal would be to open as soon as possible.”