Cheryl LaFleur, former commissioner at the Federal Energy Regulatory Commission, received the Carnot Prize for distinguished contributions to energy policy from the Kleinman Center for Energy Policy at the University of Pennsylvania.

T. Kevin Birch / For the Kleinman Center for Energy Policy 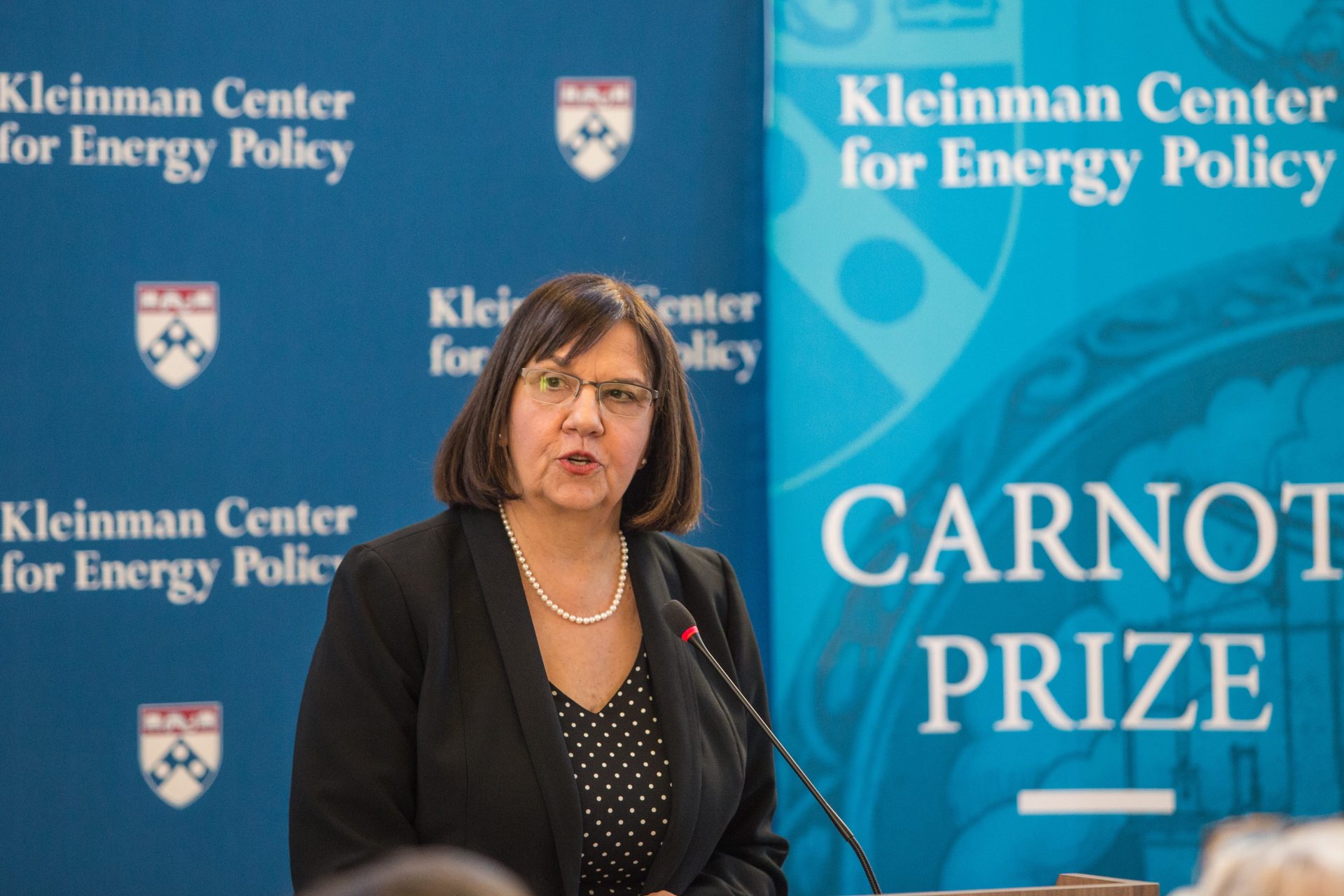 T. Kevin Birch / For the Kleinman Center for Energy Policy

Cheryl LaFleur, former commissioner at the Federal Energy Regulatory Commission, received the Carnot Prize for distinguished contributions to energy policy from the Kleinman Center for Energy Policy at the University of Pennsylvania.

Cheryl LaFleur says she promoted climate-related policy in her two terms on the Federal Energy Regulatory Commission, but worries that climate is being downplayed by the current commissioners because of the policies of the Trump administration.

LaFleur, who was in Philadelphia on Thursday to receive an award from the University of Pennsylvania’s Kleinman Center for Energy Policy, said FERC should be giving more weight to climate change in making its decisions on energy markets and infrastructure, but appears to be moving in the opposite direction.

In 2016, the commission started estimating downstream greenhouse gas emissions for new energy projects, a policy that she saw as a first step in including climate in FERC’s determination of whether a project was in the public interest.

But that policy was reversed in April 2018 when the commission “sharply curtailed” how much it would factor climate into an order, she said in an interview with StateImpact Pennsylvania before the award ceremony.

“So rather than making more progress in integrating climate with our decisions, a great deal of negative progress has been made, and I wish I had been there to see more of that story play out because I think the arc of the future is going in the direction of more climate consideration,” she said.

Mark Alan Hughes, faculty director of the Kleinman Center, said LaFleur has been at the forefront of steering policy on major energy transitions including the growth of natural gas, the shift away from coal, and the development of clean-energy strategies. For those efforts, she received this year’s Carnot Prize for distinguished contributions to energy policy.

LaFleur, a Democrat who was nominated in 2010 by President Barack Obama, said she had succeeded “to a large extent” in creating a bipartisan consensus on the commission, whose five members are nominated by the White House. Two seats are vacant, leaving Republicans in a 2-1 majority.

She wasn’t nominated for a third term earlier this year after support was withdrawn by Senate Minority Leader Chuck Schumer, but even if she had won that support, she suspects she wouldn’t have been renominated because the White House “appears to not be putting forward a Democratic nominee,” she said.

As a commissioner, she said, she advocated for policy that was driven by facts rather than ideology, but said that during her last two years on the commission from 2017-19 there was a “concerning trend” of more party-line voting on major policy issues, particularly how FERC took climate into account.

She said she’s concerned about the increase in party-line voting because it impairs FERC’s credibility as an “independent, bipartisan, technocratic regulator.”

In her first several years on the commission, she said, FERC took many actions to ensure that new carbon-free resources could fairly compete in the market. But that policy now appears to be fading in step with the Trump administration’s opposition to curbing emissions.

“Climate has become a more contentious issue in this administration, with its policy of restoring the coal industry, and I think it has become more difficult to reach consensus on things,” said LaFleur, who is now a director the Independent System Operator of New England, a grid operator.

She argued that FERC has a responsibility to take climate into account when determining the environmental impact of an energy project such as a pipeline, a view that she said is not shared by the current commission.

Asked whether FERC provided “rubber stamp” approval for new pipeline projects, as argued by many environmental groups, LaFleur said she voted against some pipelines because she thought they were not in the public interest because of routing issues or because they weren’t needed. But she acknowledged that the commission did approve most of them.

Generating more controversy within the commission has been the sharp growth in natural gas production and use over the last decade, she said, partly because of the impact that new pipelines have on communities.

“That’s led to a lot more gas pipelines, and that’s hard for people,” she said. “People are concerned about more infrastructure going near them, and more pipelines means more controversy.”

LaFleur dismissed criticism that FERC’s credibility is undermined because it receives funding from the industries it regulates – which pass the cost on to their ratepayers. “I don’t think the fact that it’s paid through energy bills rather than as a direct tax affects the decisions of FERC,” she said. “If it was part of the regular budget, it would get more political.”

“They are all trying to do their best as they see it,” she said. “But keeping the commission fully staffed with commissioners, and trying to reach consensus on things would be a good way forward.”

In court, seven people who live near Mariner East pipelines will urge a regulator to stop the project for good. It might be their last chance