House Speaker Nancy Pelosi of Calif., leaves after speaking about the House impeachment inquiry into President Donald Trump at a news conference on Capitol Hill in Washington, Tuesday, Oct. 15, 2019.

Fifty-seven percent of registered voters in Pennsylvania support an impeachment inquiry into President Donald Trump, according to a new statewide poll from Franklin & Marshall College.

“A proportion of those folks just want to know the truth. They haven’t come to any judgment yet,” said Berwood Yost, director of the Center for Opinion Research at the Lancaster County college, which conducted the poll.

An even higher percentage of registered voters, 71 percent, say it is unacceptable for a president to ask a foreign leader to investigate a political opponent, according to the survey of 482 registered voters conducted from Oct. 21 to 27.

Franklin& Marshall’s Thursday release of the poll results comes on the same day that the U.S. House of Representatives is expected to cast an impeachment vote, formalizing the public stage of the process.

Most respondents either strongly support the impeachment inquiry or strongly oppose it. There’s not a lot of people in the middle.

“Politically and consequently, things don’t change much from an elected official’s perspective, until you start seeing erosion in the president’s base,” Yost said. “We don’t see that yet.” 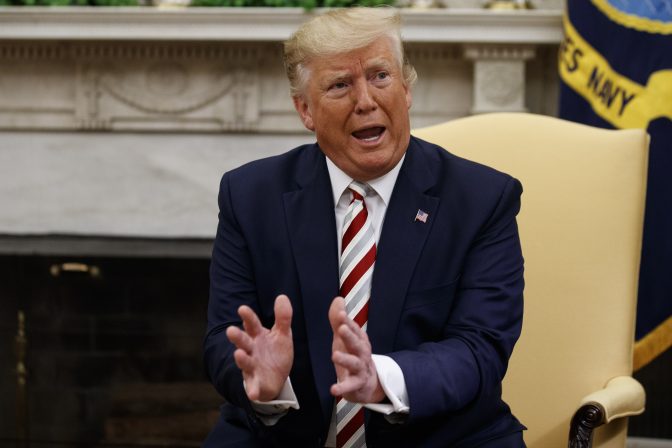 President Donald Trump speaks during a meeting with Romanian President Klaus Iohannis in the Oval Office of the White House, Tuesday, Aug. 20, 2019, in Washington.

Despite the support for the impeachment inquiry, Trump’s overall approval rating is similar to what President Barack Obama had at a similar point in his first term. In the survey, 35 percent said Trump is doing an “excellent” or “good” job as president.

In October 2011, 37 percent of respondents in a Franklin & Marshall poll said the same of Obama.