$500 million needed for fixes to Pa.’s state parks. But there’s no agreement on where to get that money

Some state legislators are expressing concerns about funding gaps for Pennsylvania’s 121 state parks.

The park system has a growing list of maintenance and replacement projects. That includes money for campgrounds, drinking water systems, swimming pools and more.

The estimated cost for all those projects is about $500 million.

“People start to make decisions. ‘Gee, maybe I won’t go to that park anymore because the quality of the facilities isn’t there,’ ” Longietti said during a House Tourism & Recreational Development committee meeting on Wednesday. “(I) heard that back home a few years ago.”

Longietti made the comments as the committee discussed a preliminary strategic plan report from the Bureau of State Parks within the Department of Conservation and Natural Resources. The report says more people want to visit state parks, but the conditions of park facilities are deteriorating.

Annual attendance at state parks increased from 29 million in 1970 to 39 million in 2018, according to the report. But the department says funding hasn’t kept up, and the backlog in needed maintenance and other projects keeps growing. About 25 years ago, a state report identified $100 million worth of needed maintenance and replacement projects. That amount has grown to half a billion dollars.

Paul Zeph, chief of the planning section for the Bureau of State Parks, warned that his bureau faces tough choices if additional funding doesn’t come through.

“We may have to shut down some facilities. We may have to make some parks a little more remote … without bathrooms,” Zeph said. “We’re not sure. We just don’t know what the answers are at this point. But we’re identifying that we do have a need.”

The state park system has an operating budget of about $110 million a year, with most of that money coming from the state’s general fund, special reserve funds and user fees at parks. Plus, the General Assembly has been allocating about $20 million a year for capital projects, Zeph said.

While the state park charges fees for access to campgrounds, swimming pools and other features, Pennsylvania is one of the few states that doesn’t charge a fee to anyone entering a state park, Zeph said.

And according to a recent survey, the idea of charging a fee isn’t a popular one. 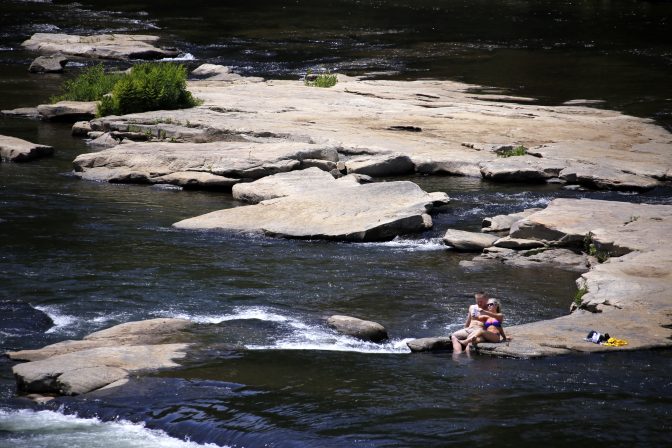 Visitors to Ohiopyle State Park play in a natural water slide Sunday, May 31, 2015.

As part of its strategic plan, the state park system conducted three surveys in 2017 and 2018. One survey was administered online and at parks. The department organized another one by phone to avoid receiving feedback from people who have a bias in support of parks. And a third survey polled Pennsylvanianians who identified as Latino, African American or Asain.

Zeph said the state park system has looked at fees charged by other states, noting that those states tend to provide less money for parks from their general funds. In other words, the net effect isn’t necessarily more money for parks.

“It may seem like an easy solution, but it’s shown to really not be quite that simple and a lot more complicated,” Zeph said.

State Rep. Dan Moul, R-Adams, said the state is missing out on money from out-of-state visitors by not offering more resort-style attractions. He has supported legislation aimed at opening up some state parks to private hotels, amusement parks, golf courses and more.

“I don’t want to see downtown Las Vegas at any of our parks either, but we do have some state parks that have big enough lakes,” Moul said.

He said such a move would attract more visitors from out of state, and that businesses would also pay the state to rent the land.

Covering a House Tourism and Recreational Development Committee this morning. The meeting is focused on Pennsylvania’s state parks. pic.twitter.com/CC7UsuKf19

Zeph said the department has looked into that resort approach and determined it wouldn’t pay for itself on a year-round basis, and some projects in other states lose money.

He said the stated add an inn at Bald Eagle State Park in Centre County as an experiment. It’s popular, but even that doesn’t pay for itself.

“The bigger you get, the more the commonwealth ends up paying,” he said.