Jush Juffe, a co-owner of a real estate and rental company, says the business had to lay off about 25 workers after Gov. Tom Wolf ordered many types construction work to shut down.

"The damage caused by a full stop to the American economy will be devastating.”

March 24, 2020 | 10:15 AM
Updated: March 24, 2020 | 11:21 am
With our coronavirus coverage, our goal is to equip you with the information you need. Rather than chase every update, we’ll try to keep things in context and focus on helping you make decisions. See all of our stories here.

Josh Juffe drove up to Freedom Armory, where a large sign describes it as “Your Second Amendment Connection,” only to find that the gun store was closed.

The 39-year-old co-owner of a real estate and rental company didn’t appear bothered that he wouldn’t be able to buy a gun sling.

But Juffe said he worried that efforts to curtail the coronavirus outbreak by ordering all but essential businesses to close was going too far. The question wasn’t idle punditry: Juffe’s home building company laid off about 25 workers after Wolf included most construction projects on the list of non-life sustaining businesses.

“We certainly don’t want our health care system to be overrun,” Juffe said. “But the damage caused by a full stop to the American economy will be devastating, as well.”

Monday was the first day that the Pennsylvania State Police and other law enforcement agencies planned to enforce a new order from Gov. Tom Wolf, issued Thursday, to shut down physical locations of more than 100 types of businesses. Wolf’s enforcement action came as the state reported its sixth COVID-19 death and confirmed infections reached 644.

The issue of how far to restrict daily activity is a central question. Wolf has said the measures are needed to slow the spread of the coronavirus, and he expects them to remain in place until the number of COVID-19 cases declines

“And when that happens, I’ll be the happiest person in the world to say we don’t have to do these draconian things any more,” Wolf said during a Sunday evening news conference, live streamed from his home in York County.

Under Wolf’s order, grocery stores, gas stations, pharmacies and many other types of businesses can remain open. And the state created a waiver application process for individual businesses to make their case to stay open. But the order remains far reaching, closing the physical locations of gyms, barbershops, certain manufacturing operations, many professional services, and more.

Wolf has told law enforcement to offer warnings to businesses that don’t comply. But owners ultimately could face a range of penalties, including a $25 to $300 fine in some cases and jail time if they don’t pay that fine. Pennsylvania State Police say they issued 27 warnings on Monday for businesses not in compliance. They issued no citations. 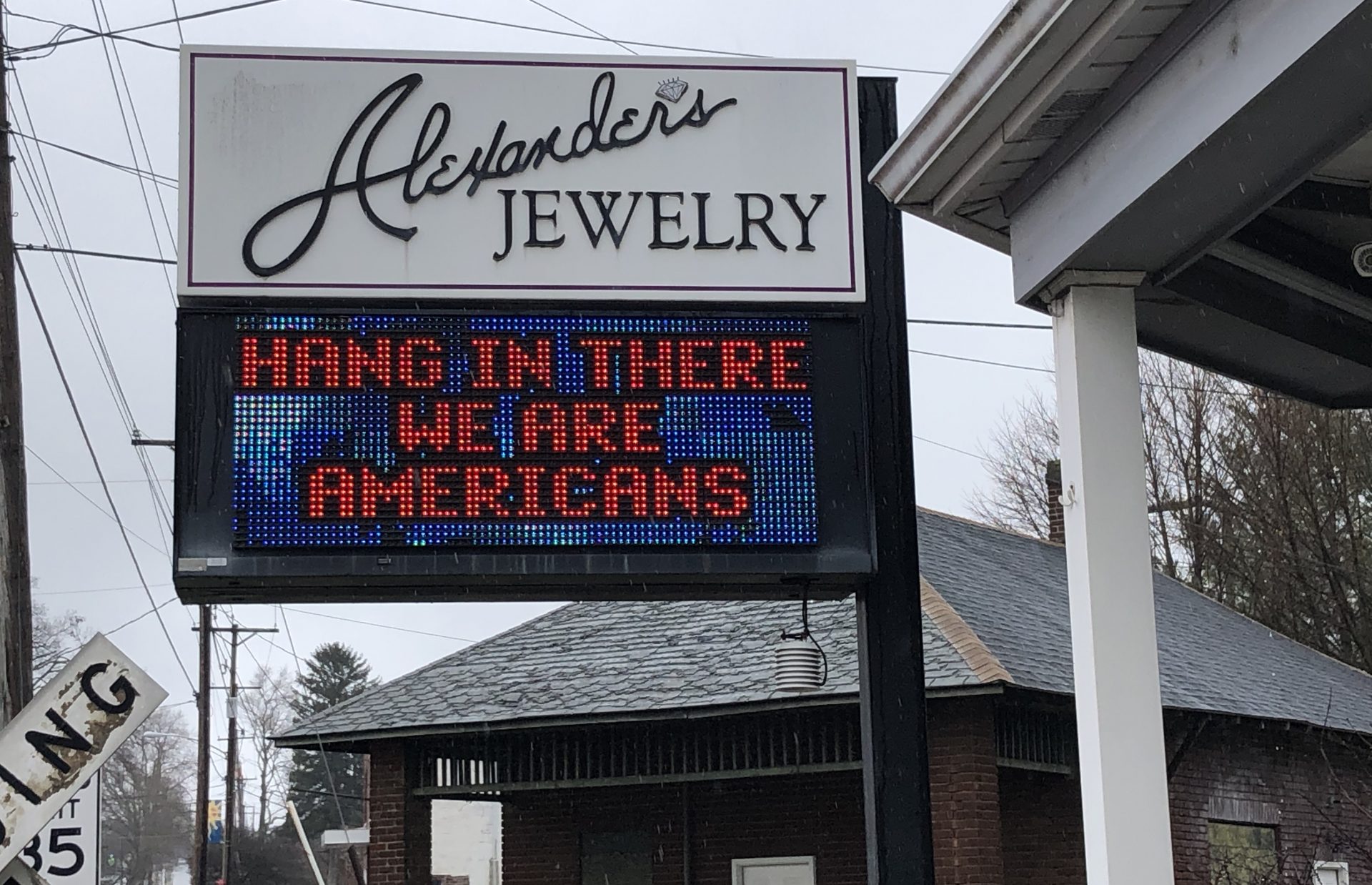 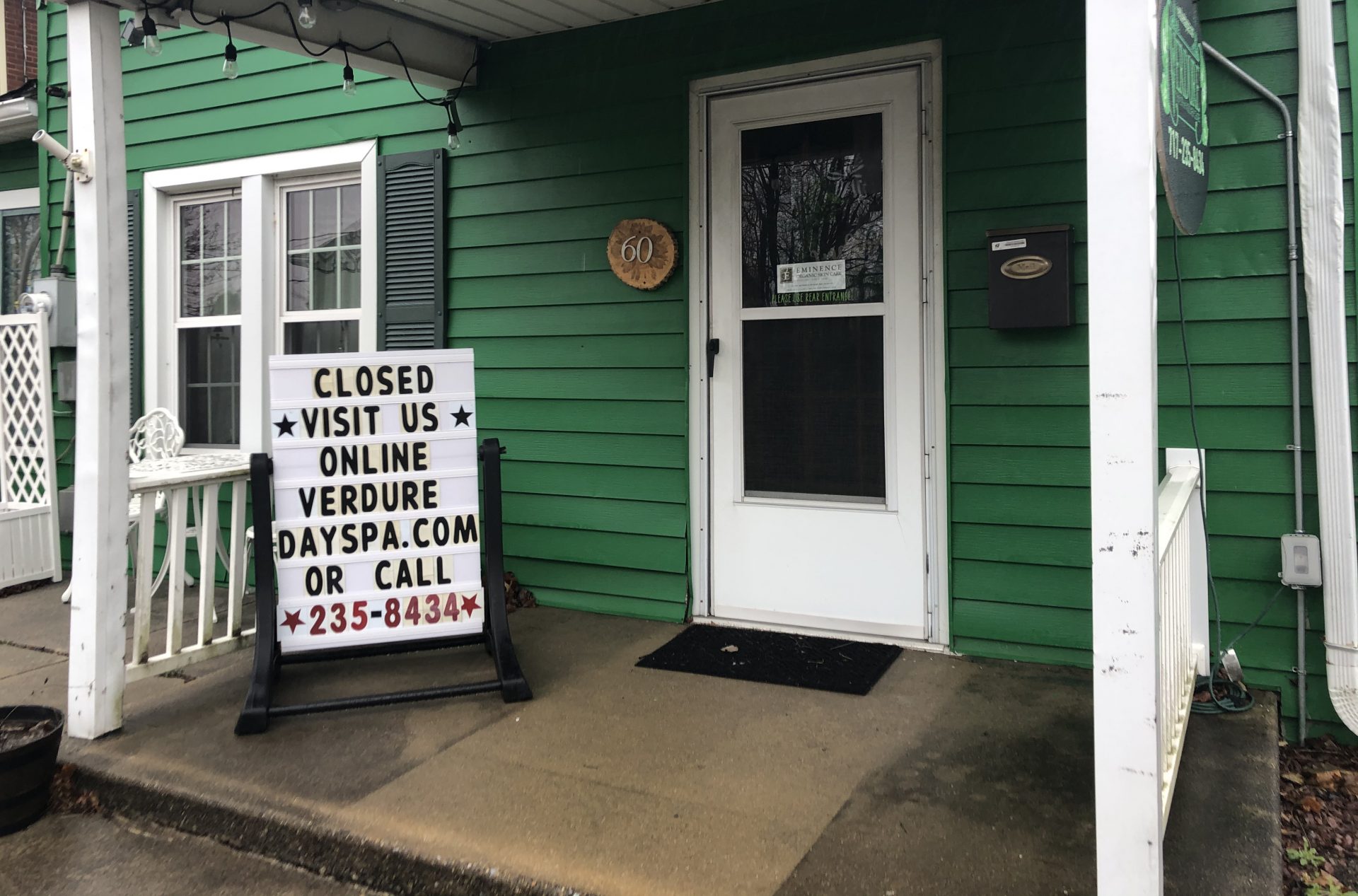 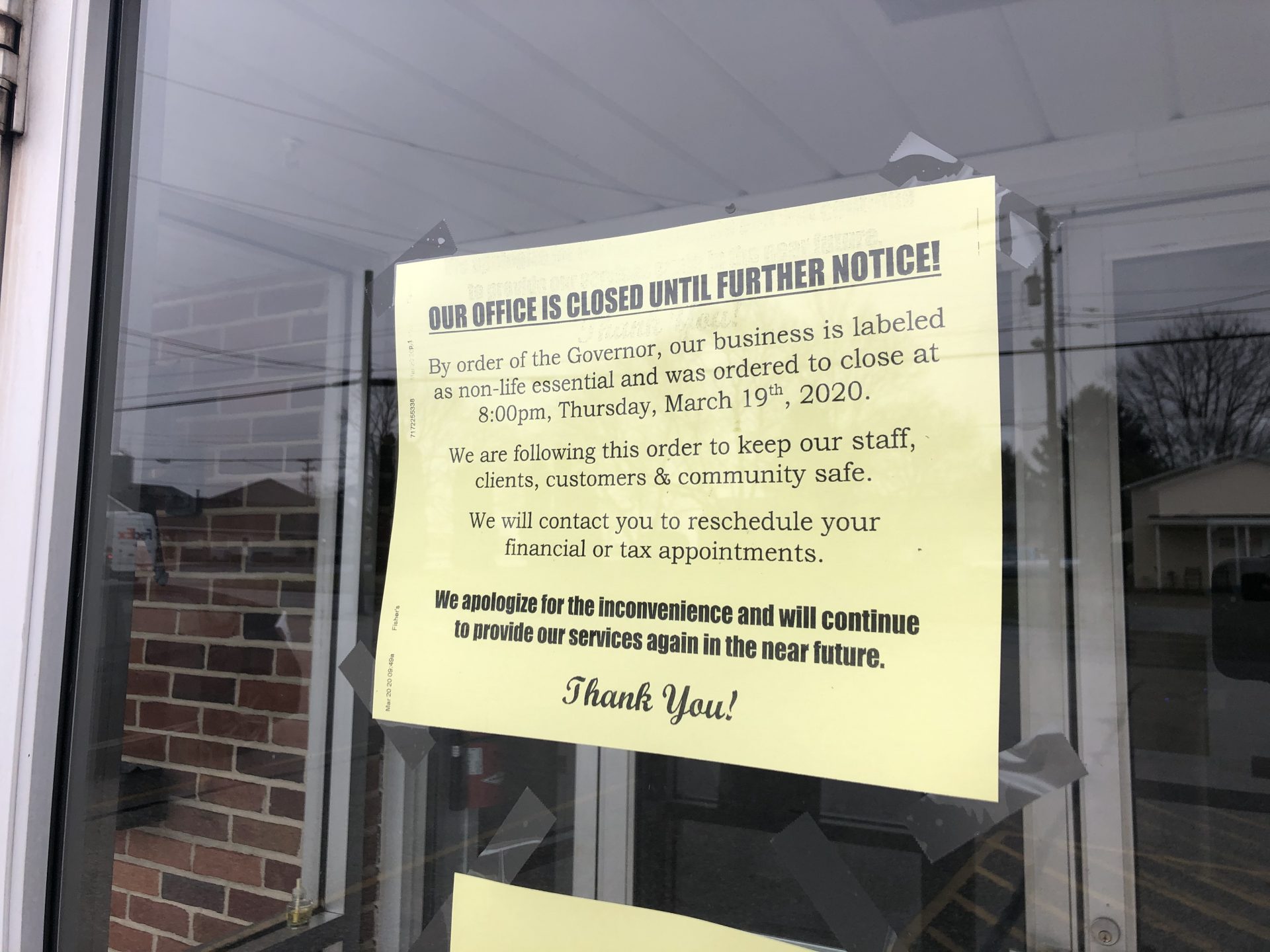 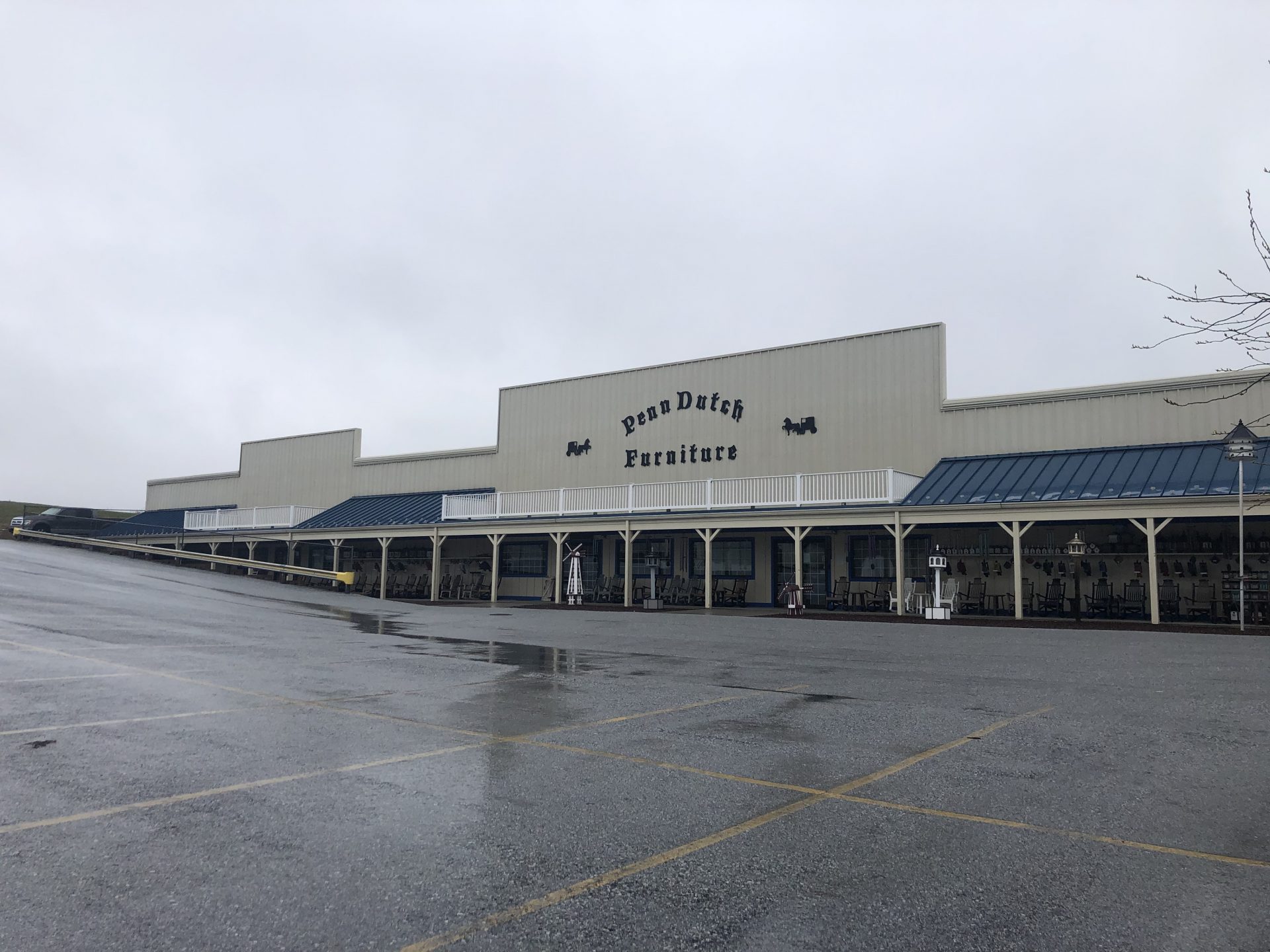 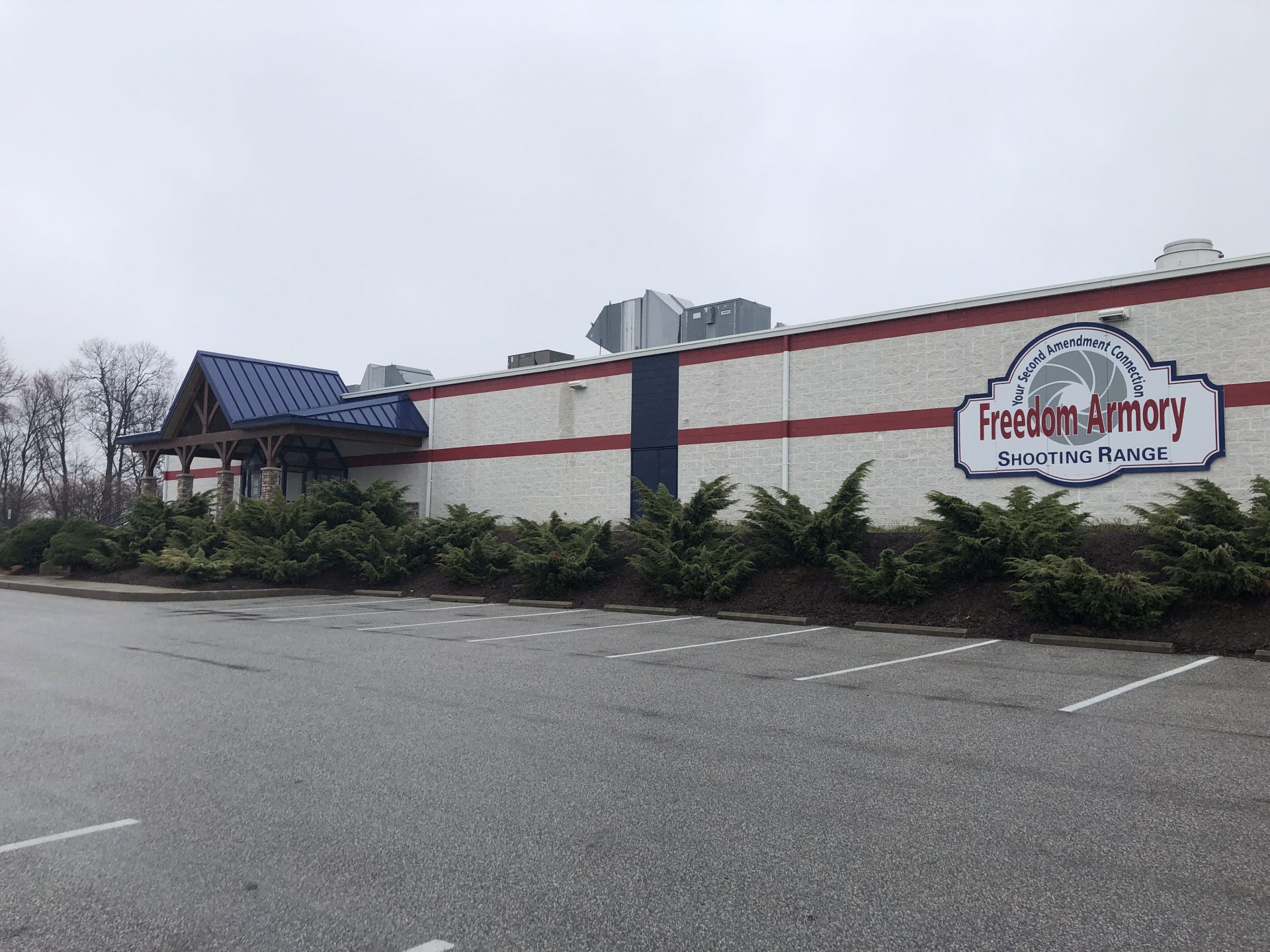 And stores that were allowed to remain open took their own precautions. A pet store limited business to two customers at a time. A beer distributor asked that no more than 10 customers enter at a time.

At Freedom Armory, a large building with an entrance that looks out on farmland, owner Scott Morris said he was in the shop to clean up from the rush of customers the store had before it was required to close. He was also there to accept some deliveries he expected. But he wasn’t letting customers inside.

Morris said the business took precautions before the shutdown order. The shooting range was closed to prevent people from being infected from shared safety glasses and earmuffs. He also placed limits on the number of customers allowed in the store at any given time, and increased sanitizing measures.

“The damage to the country is something that has to be weighed in the decisions that are being made,” Morris said. “[If] businesses are out of business too long, obviously, there’s the issues of bankruptcies and all the other things that flow from that.”

He said his business isn’t in jeopardy, and he plans to pay his nearly 20 employees for at least two weeks. But he said he sees the decision to include gun shops on the closure list as just another sign that the Democratic governor “is predisposed to be against our industry.”

“There are those in this country who would believe our business is a life-sustaining business,” Morris said.

Juffe, the unsuccessful Freedom Armory customer, said he wants Wolf to take another look at his ban on construction. Under Wolf’s order, only emergency repairs are authorized, along with construction of health care facilities.

Juffe noted that Wolf is allowing certain attorneys to keep their offices open.

“My superintendents out on a construction site, out in open weather, and the workers that are working, have far less contact than an attorney’s office that’s remaining open,” Juffe said.  “I’m not sure they’ve thought this all the way through.”

On South Main Street in Shrewsbury, Alexander’s Jewelry store had a flashing sign that said, “Hang In There / We Are Americans.” A sign at a law firm’s office told customers they were still scheduling consultations and meetings via telephone. Verdure Day Spa & Wellness Center had a sign out front encouraging people to visit the shop online or call.

Given that the business offers massages and emphasizes wellness, Glatfelter didn’t feel like it was appropriate to stay open and possibly contribute to the spread of the coronavirus. But it was still a difficult choice.

“For me, I have a very hard time ever closing my business,” Glatfelter said. “But I have several employees, and the thing that made it easier was trying to think that I was doing it for the benefit of them and their families, as well.”

She said she can’t pay her employees while the shop is closed, and she’s attempted to set them up for unemployment compensation. Still, she believes widespread shutdown is worth the pain if it leads to a faster recovery.

“It’s sad that it’s come to this, the forcing of it,” Glatfelter said. “But I’m just hoping that, you know, when people follow through with what they’re requesting, we can get through this quicker and be back to business as usual, helping people again.”

At a nearby shopping center, Mye Bey held a grand opening event for her $5 jewelry store, Princess Jewlz Boutique, on Feb. 29. She shut it down less than three weeks later, following Wolf’s order. 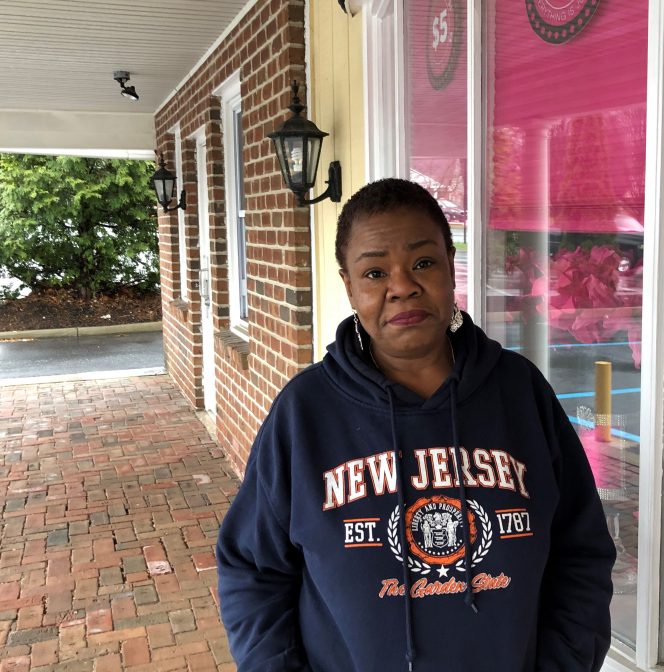 Mye Bey held a grand opening event for her $5 jewelry shop on Feb. 29. She closed three weeks later in response to an order from Gov. Tom Wolf to close all non-life sustaining businesses.

On Monday, Bey could see the effects of the shutdown on neighboring shops.  Next door, a vape shop had the governor’s order taped to its window, along with signs saying that “all valuable have been removed from the property.” A laundromat had a sign that encouraged people to wash their hands frequently and instructed customers to sit in their vehicles while they waited for their clothes to wash and dry.

At Bey’s shop, pink pieces of paper hung in the window, announcing the store’s closure. “Sorry For The Inconvenience,” one read. “Safety Has To Be Our Top Priority.”

Bey stepped outside to the shop to talk with a reporter. She said she came to the store to do some work, check some numbers and clear her head.

“It still feels good to be here,” she said.

Bey said she’s praying that government programs come through to help out businesses. Even with the concerns over staying afloat, she supports the restrictions.

“The public safety is important. That’s number one. We’ve got stay safe in this — no matter what” said Bey.

She knows scientists are working hard on vaccines and other treatments.

“They got to figure out the unknowns,” she said. “Until then, they got to take whatever precaution measures they have to take to keep us safe.”

What the governor's stay-at-home order means