Gov. Tom Wolf of Pennsylvania speaks at a news conference at Pennsylvania Emergency Management Headquarters where he said he was ordering schools and other facilities to close in a suburban Philadelphia county, Montgomery County, that has been hard-hit by the COVID-19, Thursday, March 12, 2020 in Harrisburg.

Wolf: “Ultimately, we’re gonna win or lose this battle by what each individual Pennsylvanian decides to do on his or her own.”

(Philadelphia) — With schools and businesses closed across the region, anxious residents with plenty of time on their hands have a new ritual: watching their states’ daily coronavirus briefings.

What once would have been a bureaucratic bore is now must-see-TV, as the worried public clamors for every new detail about the pandemic they can find. In New Jersey, New York, and Pennsylvania, they’ve had to turn to three very different governors for guidance and information.

Gov. Phil Murphy has drawn on his roots as a former Goldman Sachs banker and ambassador to tackle the coronavirus pandemic with a mix of data and diplomacy as he watches more New Jerseyans die from the virus than from the Sept. 11, 2001, attacks.

He hasn’t shied away from the camera or hesitated to show who’s in control, saving his fiercest ire for “knuckleheads” who flout his stay-at-home order, price gouge, or engage in racist behavior. 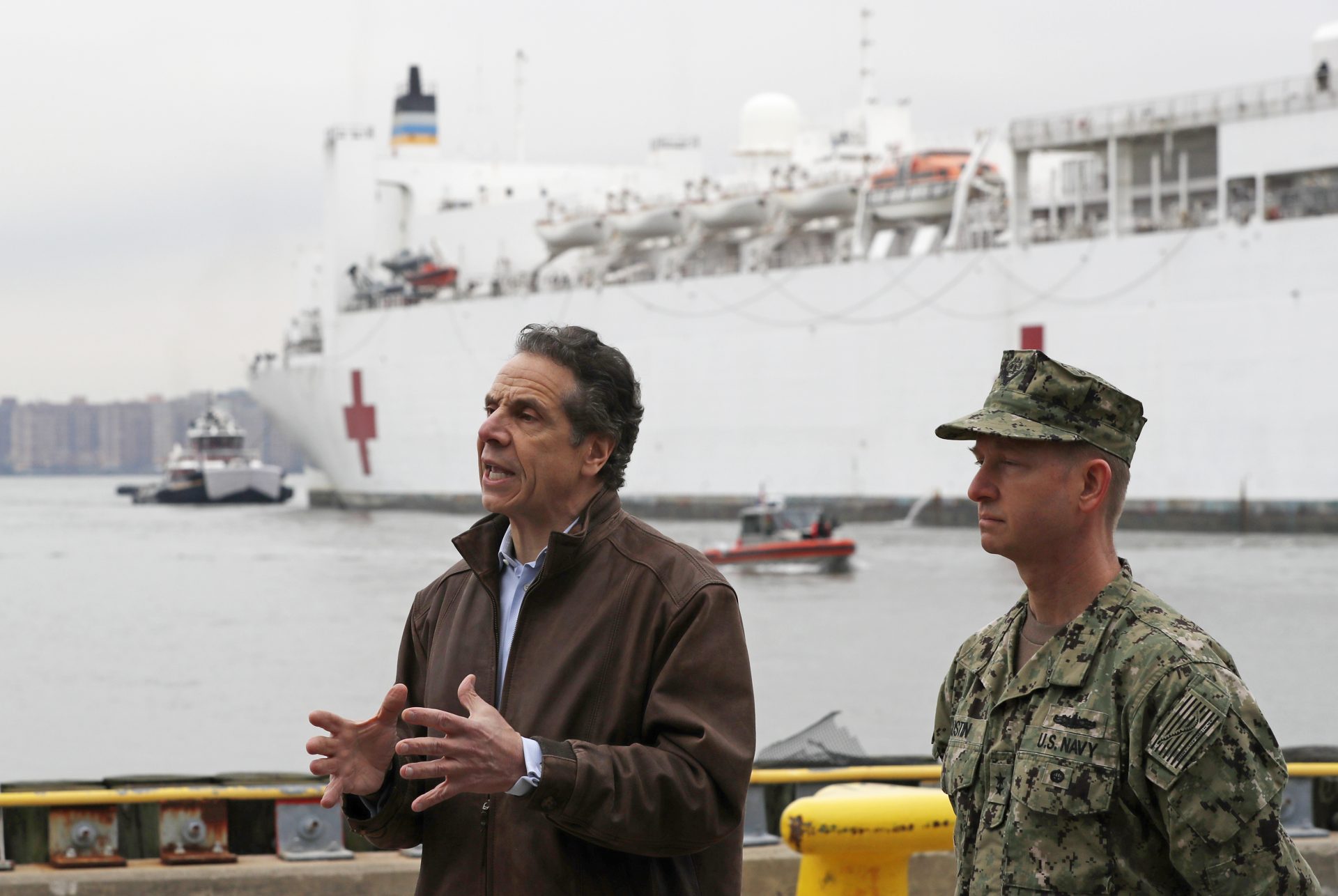 New York Gov. Andrew Cuomo, left, speaks after the arrival of the USNS Comfort, a naval hospital ship with a 1,000 bed-capacity.

“There is a special place in hell for the people who take advantage of this health crisis,” he has said.

Across the Delaware River, Gov. Tom Wolf, a soft-spoken Ph.D. holder who once cast himself as a political outsider, has let Pennsylvania’s health secretary, Rachel Levine, take the public lead. Wolf and Levine have repeatedly said the state is doing all it can to prepare for a surge, an approach that has reassured much of the public, according to a new poll.

Still, they have been tightfisted about details, instead emphasizing the need for everyone who can to stay home.

“Ultimately,” Wolf recently said, “we’re gonna win or lose this battle by what each individual Pennsylvanian decides to do on his or her own.”

As the Trump administration’s response to the outbreak comes under scrutiny, governors have become the public faces of the crisis.

“We are looking to our governors, our leaders to do two things,” said Anne Buchanan, a Pennsylvania public relations and crisis communications executive. “Show us how to feel and what to do.”

She’s a fan of Cuomo’s news conferences, which include presentations, projections on the surge, and personal stories. They’ve drawn praise from pundits and even the governor’s political opponents.

“He leans on the science and reinforces over and over again the steps that need to be taken,” Buchanan said. “He taps into everyone’s greatest fears and then offers reassurances.”

In New Jersey, it’s not uncommon to see Murphy channel his inner technocrat at hour-plus news briefings. He comes armed with graphs and projections of the virus’ spread, saying he’s determined “to break the back of that damn curve.”

Social distancing is both our best offense and best defense against #COVID19.

Murphy has been relatively candid about the readiness of the state’s health system, with routine updates on beds available, ventilators in stock, and plans on how the state will find the medical supplies and hospital beds it needs to meet demand when the virus peaks.

Wolf and Health Secretary Levine haven’t shared projections at Pennsylvania’s 30-minute daily briefings, which begin with an overview of cases and end with officials replying to questions from journalists submitted online. Wolf has appeared at half of the briefings held over the last two weeks, delivering updates on his mitigation orders and urging the public to stay home.

Levine has emphasized the difficulty of modeling the future, and eschewed specifics about just how many intensive-care beds Pennsylvania will need at the virus’ peak or when exactly she believes a surge may occur. Instead, she’s repeatedly sounded the message: “Stay calm. Stay home. Stay safe.”

Of course, showmanship during briefings doesn’t compare to actual results — in this case, slowing the spread of the virus and saving as many lives as possible. To do that, each governor has ordered residents to stay home and some businesses to close.

Wolf was the first to target businesses, “strongly urging” those deemed nonessential to close on March 16, 10 days after the state reported its first cases. That suggestion was shortly followed by an order telling all but “life-sustaining” businesses to close physical operations or face possible fines from the state police.

Cuomo issued a statewide stay-at-home order that targets residents and businesses on March 20, nearly three weeks after the state reported its first case. In early March, he told the public the risk in general was low. 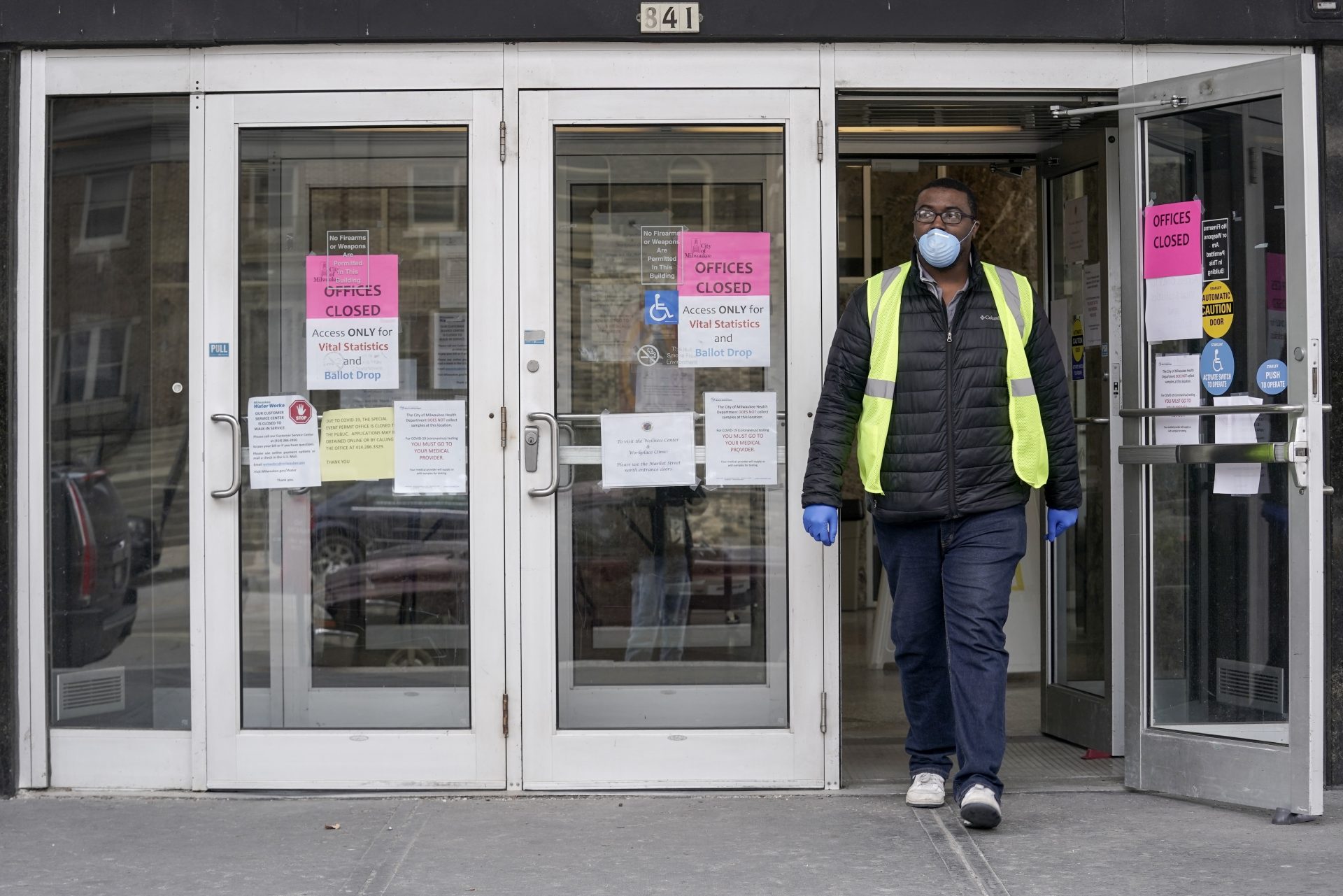 FILE – In this March 30, 2020, file photo, a worker leaves the the Frank P. Zeidler Municipal Building in Milwaukee. Gov. Tony Evers asked President Donald Trump on Tuesday, March 31, 2020 to issue a major disaster declaration for the state of Wisconsin due to the coronavirus pandemic, as unemployment claims hit a daily high and the state’s health secretary warned lawmakers that Medicaid enrollments were going to increase dramatically.

He resisted a “shelter-in-place” order as late as March 18, when he told the New York Times he “wouldn’t approve” one.

Although Trump has tried to pin the blame on New York for its “very late start,” Cuomo’s office said “the federal government was absent.”

Murphy ordered “nonessential” businesses to close and residents to stay home on March 21, more than two weeks after the state confirmed its first case. Two days later, Wolf put seven hard-hit Pennsylvania counties under a stay-at-home order, increasing the number as part of a “measured” approach. He extended the order to the entire state on April 1.

Facing pressure from different industries, all three states have revised their lists of businesses that must close.

Like Cuomo and Murphy, Wolf is a Democrat, but he’s dealing with a GOP-controlled legislature that has begun to publicly question his order as well as mounting pressure to provide more information about a secretive waiver process that’s allowed thousands of businesses to reopen.

Pennsylvania officials to date have not released the list of businesses that have been granted a waiver.

“If I can be convinced that that’s in the best interest of making sure that we’re doing the right thing, I will do that,” Wolf said in mid-March.

His administration has since said the information will be made public, but has not given a date.

Wolf has also taken a different messaging approach to enforcement of his orders, emphasizing voluntary compliance while Cuomo and Murphy talk tough.

The state police are able to cite both businesses and residents who violate Wolf’s order, but when asked about enforcement on April 1, the governor said he expected Pennsylvanians to stay home because they had a “vested interest” in doing so.

Even so, the state police have issued more than 100 warnings for businesses and one citation for a woman in York County.

Compare that with New Jersey, where police have ticketed scores of people for not following Murphy’s order.

In recent days, law enforcement officials have broken up gatherings including a funeral in Lakewood and Ewing that defied the governor’s ban, and charged organizers with crimes that carry more than a year in prison time and more than $10,000 in fines.

“No corona parties,” Murphy said on Twitter. “They’re illegal, dangerous, and stupid. We will crash your party. You will pay a big fine. And we will name and shame you until everyone gets this message into their heads.”