FILE PHOTO: In this March 27, 2015 file photo, Pennsylvania State Police block the road to an apartment complex in Hempfield, Pa.

Can you be cited just for going on a drive? State police answer common questions

On Wednesday, York County District Attorney Dave Sunday said he plans to withdraw one of the citations in a case that received national attention.

“Based on the facts in this one specific case, the fact that she was on her way home, that she was by herself in her car, that she was completely cooperative … I think that prosecution from my office of this may not be in the public interest,” Sunday said during an interview on WSBA Morning News with Gary Sutton.

The York County case — in which 19-year-old Anita Shaffer told PennLive that she was alone in her car with no plans to interact with others  — highlights the ongoing concern and questions over Pennsylvania’s stay-at-home order, which the governor first applied to seven counties last month. By April 1, Wolf had expanded it to include the entire state.

State Police Maj. Christopher Paris says the goal is to issue citations in extreme cases, but he acknowledged that enforcement can come down to a trooper’s discretion.

“I can’t give you every single eventuality,” Paris said during WITF’s Smart Talk live radio show on Tuesday.  “Exercise good judgment. …We’re out there to educate and get people to voluntarily comply,” he added.

Can you be cited just for going on a drive?

Paris said troopers aren’t going to pull people over just because they suspect a driver is violating the stay-at-home order.

But if a driver is pulled over for another reason and isn’t driving to or from one of the allowed places, they could face a penalty.

That happened in the York County case. State police spokesperson Ryan Tarkowski said the woman was pulled over for an alleged vehicle code violation, but was charged only with violating a stay-at-home order.

Tarkowski said troopers have discretion whether to warn someone or issue a citation, “and the decision is specific to the facts and circumstances of a particular encounter.” He didn’t provide details on why the agency chose a citation instead of a warning in the York County case.

“This is kind of unsettling,” Phillips-Hill told Fox43. “I’ve had people say, ‘You know, I just want to go out on my motorcycle take a ride, and am I allowed to do that?'”

This is absurd. To Dem politicians (and it seems to be only Dems doing this, eg Wolf in PA, DeBlasio in NYC, Cooper in NC), protect public safety, but WE DON’T LIVE IN A POLICE STATE. Resist authoritarianism & don’t abuse power. Driving a car alone is not a public health threat. https://t.co/tTNszTGNgA

Paris declined to comment specifically on the York County case on Tuesday.

In the interview on WSBA, District Attorney Dave Sunday said he reviewed the case, watched video of the incident and talked to other experts. He said the trooper had probable cause to pull the woman over because of a tinted window.

“I truly don’t fault anyone in this entire situation,” Sunday said, later adding that everyone is doing their best “to work through a difficult situation and keep everybody safe and healthy.”

In a statement, Tarkowski didn’t address whether state police support the decision to not pursue charges, only saying that the county district “is ultimately responsible” for that decision. 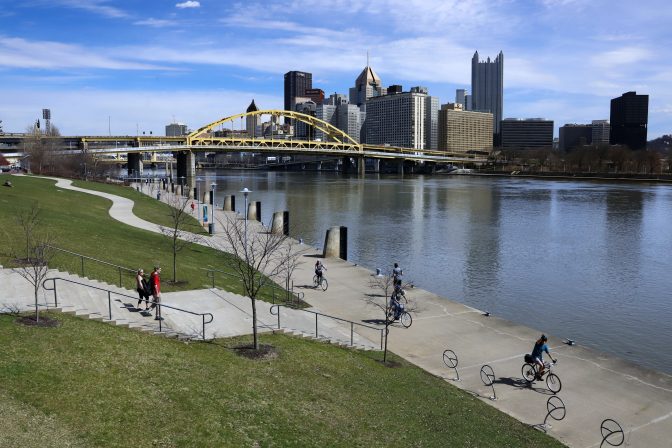 People ride their bicycles along North Shore on Thursday, March 26, 2020, in Pittsburgh. Under Gov. Tom Wolf’s statewide stay-at-home order, people can still go outside to exercise.

Who else has received citations?

The two others are:

That covers citations from state police, but local law enforcement agencies can also issue citations. One example: The chief for the Columbia Borough Police Department in Lancaster County told LNP that two people were charged with violating the stay-at-home order after drinking on a sidewalk and refusing to leave when officers told them to.

What about religious services?

The Wolf administration guidelines also say the policy is not meant to affect religious institutions. But the administration is still encouraging people to not go to church buildings or homes for religious services.

Paris said people won’t be cited by State Police for attending religious services, including for the upcoming Easter holiday.

“The right to express your religion is sacred to all of us in this trying time,” he said.

What about trout fishing?

That’s allowed. Price said state police are having ongoing discussions with the commission, including the best ways to maintain social distancing while fishing.

The Pennsylvania Fish and Boat Commission opened trout season at 8 a.m. Tuesday — earlier than usual — as a way to avoid large gatherings at kick-off events.

The commission recommended precautions. Anglers and boaters should:

“If another angler is in an area you intended to fish, move on to another spot,” the guide says.

What precautions are police taking?

Four state troopers have tested positive for the novel coronavirus, as of Monday. All are being treated at home.

“Thankfully, they’re all doing well. They’re feeling unwell, but they’re not in an acute phase of the virus,” Paris said.

The agency has about 4,500 troopers and officers across Pennsylvania, and he said they have taken precautions to reduce the spread of the coronavirus.

They are trying to limit in-person contact for certain cases, such as cases of identity theft, lost and found items, littering, and general requests to speak to a trooper.

Paris said the agency has ordered masks for personnel and is creating a policy outlining when they should be worn while on duty.

What places are people allowed to travel to?

People can still leave home for a variety of reasons, including to access health care, buy groceries, travel for essential work at a life-sustaining business, exercise and care for a family member in another home.

For the full list, see the Wolf administration guidelines.

After early show of bipartisanship, Pa. lawmakers splinter over next COVID-19 steps