Public officials including Gov. Larry Hogan in Maryland (pictured) have to decide how much information to make public.

States need coronavirus data to make timely decisions. What they share with the public varies widely.

With the coronavirus pandemic, timing is everything. When should states shut down? When should they reopen? Which hospitals need the most supplies right now? Across the U.S., those decisions largely hinge on good, accurate public health data.

And yet, how much information is shared with the public varies widely among the states.

As part of a collaborative effort, Stateline and Spotlight PA surveyed six states across the U.S. — Colorado, Georgia, Maryland, Pennsylvania, South Carolina, and Washington — to determine what information they have made accessible to the public via their websites.

All six are regularly releasing data on cases by age, sex, and county. But beyond those basic numbers, the patchwork of available information shows the differing ability of health officials to accurately collect and report data, as well as how much they think the public needs to know.

The demand from the public has largely centered around where positive cases and deaths are located. While most states made county-level information available soon after they began reporting cases, some have hesitated to localize data further because of privacy concerns.

In recent weeks, policymakers and advocates have pressed officials to begin reporting more demographic data about both positive cases and those who have been tested. In particular, racial data has proved critical, as early numbers indicated communities of color were being disproportionately harmed. Calls for more transparency have revealed systemic failures by some states to collect that information when tests are administered.

What’s clearer from the available data: seniors are dying at higher rates than adults and children. Long-term care facilities across the U.S. have proven to be tinderboxes for outbreaks, though a lack of federal data has obscured the extent of the situation. At the same time, some states are resisting calls to make facility-specific information available to the public.

Information about cases by ZIP code or census tract are critical to properly target limited resources, experts say. But not every state is offering this level of detail.

Shiriki Kumanyika, emeritus professor of biostatistics and epidemiology at the University of Pennsylvania and chair of the Council on Black Health at Drexel, said county-level figures can be problematic, especially in counties that are primarily rural but also have an urban area.

Kumanyika said that without granular geographic information, “it would totally dilute the sense of what’s going on.”

In Georgia, the Department of Public Health provides maps showing cumulative and active cases by block groups, which are subdivisions of a census tract and comparable in size to ZIP codes. Weekly maps show the spread and intensity of the disease over time.

Positive COVID-19 cases in Maryland are broken down by ZIP code and county. Data on COVID-19 deaths is available at the county level.

Under pressure from experts and the press, Pennsylvania officials on April 20 began including ZIP code-level data on coronavirus tests, both those that come back positive and negative. State officials still only provide deaths by county.

Some counties and municipalities in Pennsylvania with their own health departments are empowered to and have shared more granular data. For example, Philadelphia’s Department of Health had been providing ZIP code data for about a month before state officials made the change.

In Washington state, where the first coronavirus cases were confirmed, officials categorize cases and deaths by county. In response to a public records request asking for ZIP code data, the health department said only that “[t]he data on our website lists the data by county.”

However, King County, which has been the epicenter of the state’s outbreak, has created a data dashboard that includes ZIP code information. The county’s site features a map with ZIP code boundaries that includes the number of positive results per 100,000 residents.

Colorado, too, has seen similar divisions. While the state’s website shows only county-level information for cases and deaths, certain counties have released information by ZIP code.

In South Carolina, members of the public asked the state to report cases by ZIP codes, but officials initially resisted.

“The desire for some to obtain details about where infected people are located has become a disturbing distraction because it suggests that there are still people who don’t understand the potential threat for everyone and that any one of us can be exposed at any one time,” Linda Bell, the state epidemiologist, said during a March 31 press conference.

But on April 3, Republican Gov. Henry McMaster ordered the health department to provide the information as it was “in the public’s interest.”

Data on the race and ethnicity of people infected and killed by COVID-19 is crucial to understanding how different communities are impacted.

“We’re not wanting data for the sake of data,” said Dr. Sharelle Barber, an assistant research professor of epidemiology and biostatistics at Drexel University in Philadelphia. “We’re wanting data so we can mitigate this disproportionate impact in certain communities and come up with short and long-term policy solutions to save lives.”

All six states are now releasing racial data for reported cases. But some have struggled to collect a complete picture from labs, physicians, and hospitals.

“Our ability to report data on race and ethnicity really depends on that data being reported to the state,” Colorado State Epidemiologist Rachel Herlihy recently told reporters. “Our strategy going forward is to get that data from the beginning.”

Pennsylvania has experienced similar issues, according to Health Secretary Rachel Levine. As of April 23, 70% of reported cases did not have race or ethnicity data. Just over 50% of death data was similarly lacking information on race.

“This data has been very difficult for us to collect,” Levine said in mid-April, because of issues with what information physicians and labs are sending the state.

Similar problems have occurred in Maryland, according to Josh Sharfstein, vice dean for public health practice and community engagement at the Johns Hopkins Bloomberg School of Public Health. There, he said, some commercial testing facilities were not noting race or ethnicity when recording test results.

Still, as of April 23, the state lacked race data for just 21% of reported COVID-19 cases.

South Carolina appears to have been successful in collecting this information. In its most recent report, only 9 out of 148 deaths, or 6%, did not report race. The percentage of positive cases that lacked race data was the same.

In an email responding to Stateline’s questions about how the state was able to achieve such a high level of compliance, the South Carolina State Emergency Response Team said, “We ask individuals to self-report their race and ethnicity.”

In Washington, 37% of cases were listed as “unknown,” and the state lacked racial data on 10% of deaths, as of April 23. 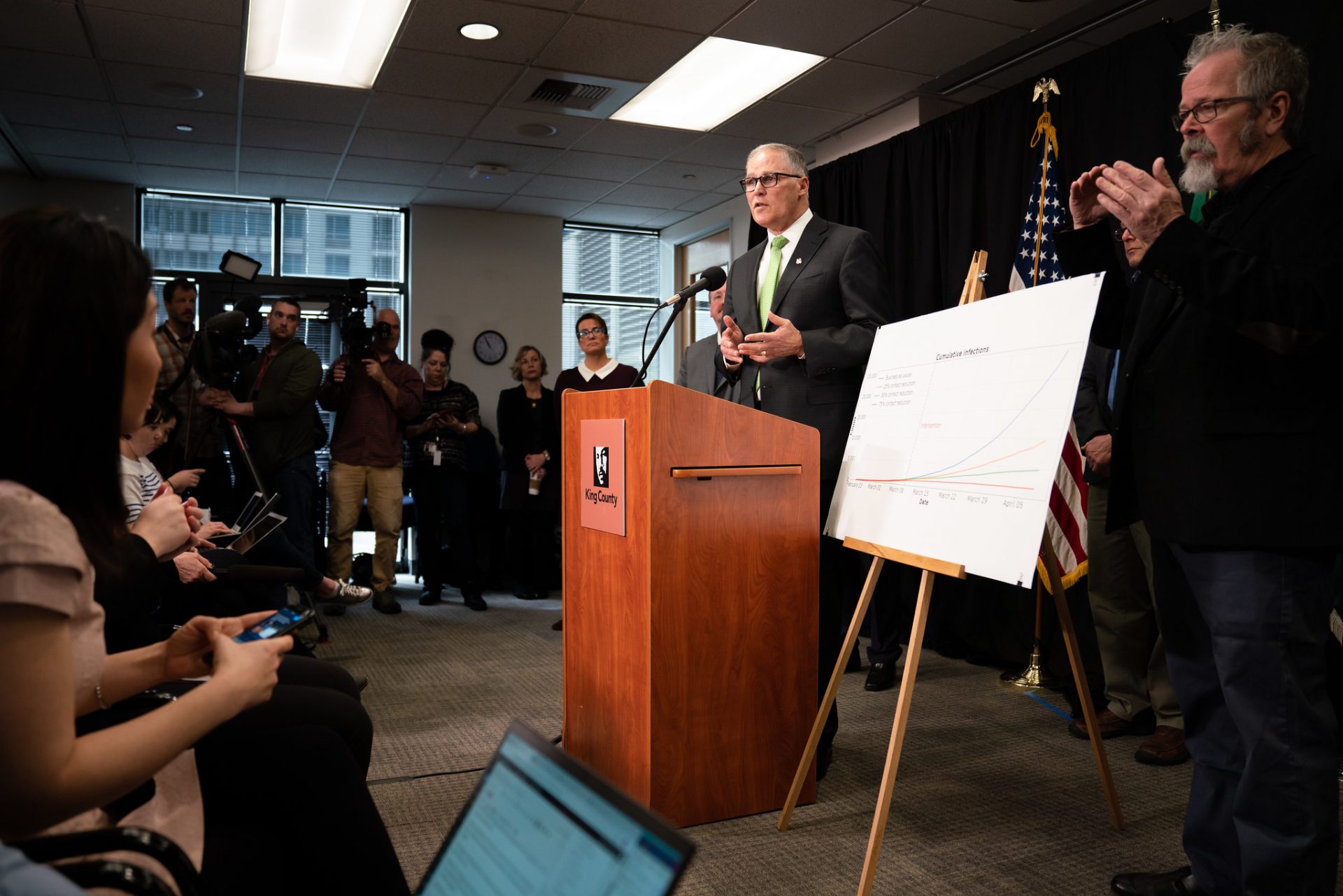 Despite being the site of the country’s first nursing home outbreak, Washington — led by Gov. Jay Inslee — has not provided such information.

Of the groups susceptible to serious complications of COVID-19, perhaps none are quite as vulnerable as seniors who live in long-term care facilities. As visitation and inspections have in many cases been suspended, family members have struggled for information.

Three of the six states surveyed by Stateline and Spotlight PA are providing the names of nursing homes that have cases of COVID-19, part of a growing transparency trend.

Colorado officials began naming nursing homes with two or more cases of COVID-19, and publishing a tally of total cases and deaths at those facilities, in early April.

Despite being the site of the country’s first nursing home outbreak, Washington has not provided such information. Maryland and Pennsylvania also do not provide facility-specific information — and don’t plan to do it.

The Maryland Department of Health said in an email the “disclosure of this information serves no public health purpose and could lead to the identification of specific persons who have tested positive for the disease.”

Pennsylvania has cited a decades-old law to hold back the names of nursing homes with COVID-19 cases, though it recently began releasing the number of resident and staff infections and deaths at long-term care facilities by county.

Alex Brown, Sophie Quinton, and Michael Ollove of Stateline contributed to this article. This story includes previous reporting published by the Philadelphia Inquirer and Spotlight PA.