Medical workers wait for cars to pull up to the swabbing tent at the city's coronavirus testing site next to Citizens Bank Park in South Philadelphia on Friday, March 20, 2020. The site, which opened Friday afternoon, is the first city-run drive-through location where people can be swabbed to determine if they have the coronavirus. At the time of opening, it was only for people with symptoms who are over 50 and healthcare workers with symptoms.

Just six counties, including Philadelphia, have their own health departments that perform their own COVID-19 case investigations.

May 2, 2020 | 4:26 PM
With our coronavirus coverage, our goal is to equip you with the information you need. Rather than chase every update, we’ll try to keep things in context and focus on helping you make decisions. See all of our stories here.

HARRISBURG — Philadelphia’s health department continues to report a drastically higher COVID-19 death toll than Pennsylvania’s official number, one of the clearest examples of the state Health Department’s challenges in compiling timely information about the virus.

For weeks, state officials have cited obstacles in reporting COVID-19 data. They have blamed counties for lags in providing information to the state, along with issues in “data reconciliation” — like delays caused by software upgrades, troublesome algorithms, and a wonky web of disjointed technologies.

Over the last week, as Philadelphia’s own Public Health Department reported a high and rising number of deaths caused by the coronavirus, the state Health Department’s count for the city remained stuck at a much lower number.

That changed Wednesday, when the state’s total count surged overnight by 479 deaths, which Health Secretary Rachel Levine said was due in large part to yet another influx of weeks-old data being “reconciled” from a number of sources.

About a third of the count in Wednesday’s surge represented deaths of Philadelphia residents, bringing the state’s total toll for the city from 276 to 424 overnight.

“[W]e are happy to see our numbers are coming together,” James Garrow, a spokesperson for the Philadelphia Department of Public Health, said Wednesday. The discrepancies, Garrow said, had been “definitely causing confusion.”

The number from the state, 424, held steady on Thursday and Friday, then dropped by two on Saturday. Meanwhile, the city’s own tally rose to 607, then 638 on Friday and 705 on Saturday.

In Pennsylvania, just six counties, including Philadelphia, have their own health departments. These counties perform their own COVID-19 case investigations and release counts on their own websites.

Some count discrepancies are inevitable, county and state officials said, due to reasonable lag times and issues with comparing and vetting the data.

What’s been less clear, though, is why Philadelphia’s self-reported number remains so much higher than the state’s total. The situation is an outlier compared with Pennsylvania’s other county-run health departments.

In Montgomery County, the local count is lower than the state’s, though the discrepancy is not as severe as in Philadelphia. The other county departments — Allegheny, Bucks, Chester, and Erie — have shown numbers largely aligned with the state.

On Tuesday, the night before the most recent surge, Nate Wardle, a spokesperson for the state Health Department, told Spotlight PA that “county health departments, coroners, hospitals, and other providers” report deaths to the state.

“And while we request the counties to provide us with their numbers they are not required to do so,” he said. “Because of that there may be a lag time between the county reporting its own numbers and subsequently sending them to the state to include in its data.”

But Philadelphia is regularly sending the state data on its deaths. 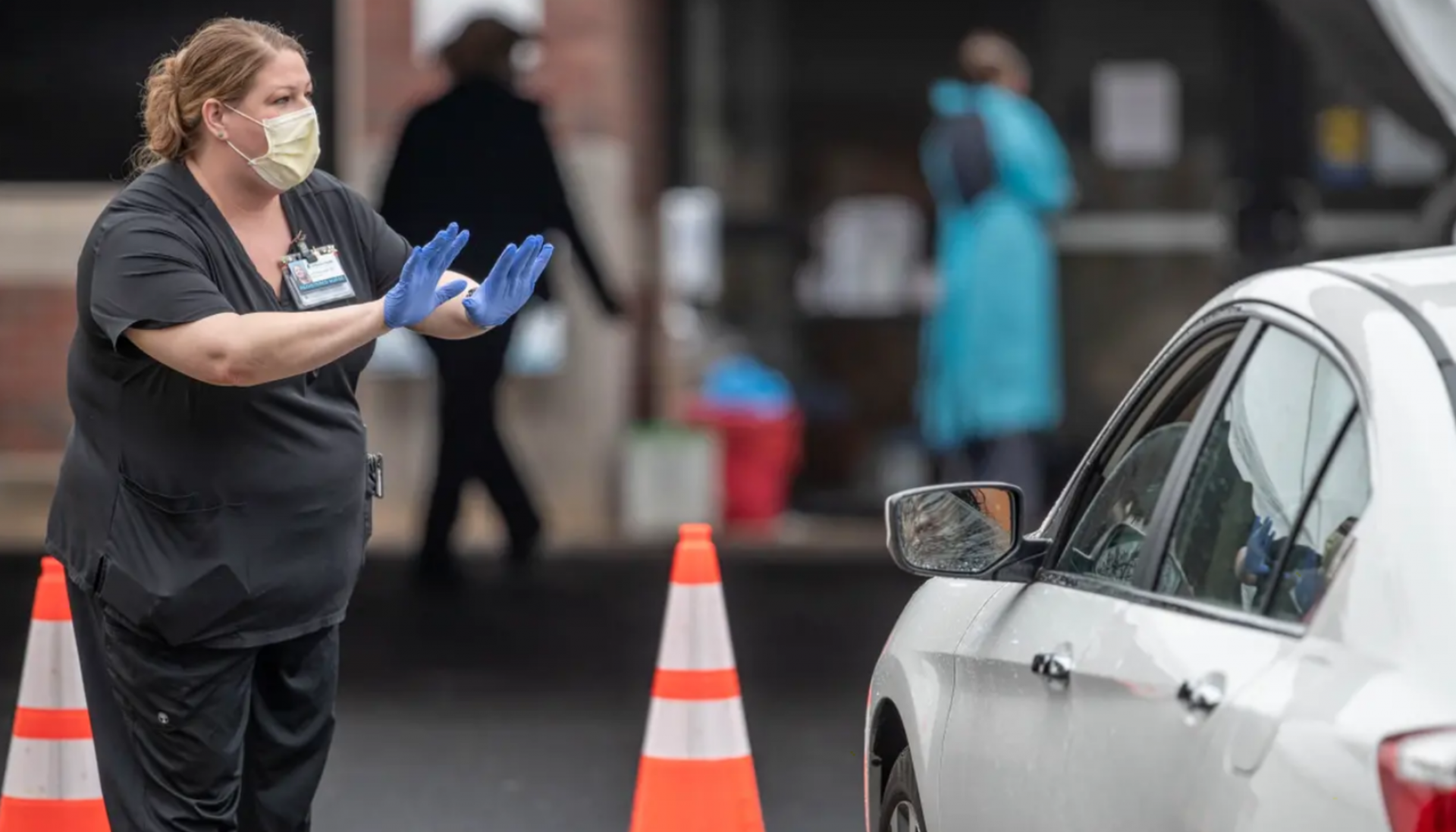 Philadelphia and its surrounding counties have been hard-hit by COVID-19. Now, they want to share resources with areas that didn’t get the brunt of the pandemic. (Michael Bryant/Spotlight PA)

Twice a week, they pass along what’s called, in public health lingo, a “line list” (basically, an Excel spreadsheet) with death information to the state. The list “encompasses all of the [COVID-19] deaths that we know of,” Garrow said.

The onus is then on the state to take the information Philadelphia sends and “reconcile” it into PA-NEDSS, the system Pennsylvania uses to track disease surveillance.

When asked why the city is sending information only twice a week, not daily, Garrow said they had been working to find the right frequency, so as not to overwhelm the state Health Department. The state, Garrow said, is inputting the data into the system manually.

“To their credit, they’re trying to get it right,” Garrow added.

Wardle did not provide specifics on what the state does with Philadelphia’s line list. Instead, he offered a broad response about the state working with the city’s department “to get information.”

Levine has spoken repeatedly about issues the state has faced while reconciling data from different sources.

On Wednesday, she said the day’s update included “data matched from our Electronic Death [Registration] System over the past 10 days.”

That system, referred to as EDRS, is managed by the state Health Department’s Bureau of Health Statistics and Registries. The department denied Spotlight PA’s request to speak to the director of the bureau.

Since March 6, Pennsylvania has required the state’s on-the-ground death reporters — physicians, coroners, and medical examiners — to use EDRS when certifying deaths attributed to the virus.

This requirement is important because, according to a state Health Department document, EDRS is the system the bureau uses to report daily COVID-19 death information to the Centers for Disease Control and Prevention.

Still, PA-NEDSS is the sole system listed on the state’s official COVID-19 web page as the source of its coronavirus data.

Technical issues with the two systems have caused serious problems for the state.

In mid-April, when the state’s reporting of Philadelphia’s deaths started to lag behind those of the city, officials blamed delays on an upgrade to the EDRS software.

Wednesday’s spike in the death count was attributed to issues with algorithms that automate the process of moving data from EDRS to PA-NEDSS.

When Spotlight PA asked to examine the code behind the algorithms, the department declined the request.

Despite the state’s efforts to reconcile COVID-19 death data, officials have decided to leave out a category that experts said is dangerous to ignore: probable deaths.

A “probable death” refers to one where a physician, medical examiner, or coroner certifies that there’s clinical evidence of COVID-19, but no test was administered to confirm the presence of the virus.

The state added those deaths into their official count last week, only to rescind more than 200 of them two days later.

Pennsylvania’s removal of probable deaths was a split from CDC guidance, first issued in early April. The guidance said it is a legitimate, accepted practice to report a COVID-19 death as “probable” if the death was likely to have been caused by the virus but a test could not be performed.

The state said it removed probable deaths, a category Levine said “can be confusing” for the public, because more investigation was needed. (Adding to the confusion is the fact that Pennsylvania’s count does still include probable cases that become deaths — meaning individuals were reported officially to the state as likely to have the virus before they died.)

“At times, there are things we need to review, and potentially revisit the way the data is being analyzed,” Levine said last week of the situation. “And this is one of those times.”

In the days following, Spotlight PA repeatedly asked the department about its analysis and the decision to remove many deaths from the count. Wardle responded: “In our attempt to do daily reporting we ran queries that had incorrect data.”

He declined to specify what exactly about the data was determined to be incorrect.

Pa. sets modest goal to conduct 8,500 coronavirus tests per day, far less than what some experts say is needed