Election workers, left, check in voters before they cast their ballots in the Pennsylvania primary in Philadelphia, Tuesday, June 2, 2020.

A Philly poll watcher got coronavirus, but the city isn’t notifying voters

Few counties in Pennsylvania report having a plan in place to alert voters, election workers, others of possible COVID-19 exposure at the polls.

A Philadelphia woman who spent the entire June 2 primary as a poll watcher tested positive for COVID-19 10 days later. It’s unclear whether she contracted the virus at the polls. But thanks to a contact tracing program the city says isn’t fully staffed, the vast majority of voters and election workers who were at that polling place haven’t been notified that they may have been exposed.

The situation also calls into question whether election and health officials across Pennsylvania are prepared to respond to potential coronavirus exposure at the polls.

Andrea Johnson, a Democratic committeewoman, says she’s been vigilant during the pandemic, working from home as a paralegal and wearing a mask on the occasions she’s gone outside. But on June 2, she spent the day at the polls at Andrew Hamilton School in West Philadelphia.

Johnson says she disclosed that information to contact tracers working for the city health department. She says she also provided a list of eight people — all voters and poll workers whose names she knew — who she’d come in close contact with in the days leading up to her positive diagnosis.

She confirmed that city health officials contacted those eight people, but said she thinks contact tracing efforts ended there.

“My whole objective is to make sure that the communities that I serve are safe, … and that we’re made aware,” said Johnson, who hasn’t had symptoms despite her positive result. “People aren’t getting tested, and you don’t know how many people like myself are walking around with a virus, and we don’t know … unless and until we get tested.”

It generally takes between two and 14 days after coronavirus exposure for symptoms to appear, according to the Centers for Disease Control and Prevention.

But it’s not yet known for how long someone with COVID-19 could be contagious, nor whether or when someone who tests positive without developing symptoms (like Johnson) can transmit the virus, according to CDC guidance.

State health officials say their guidance to contact tracers is to ask about close contacts that occur two days before a test that yields a positive result in someone who hasn’t developed symptoms.

“If someone is asymptomatic but believes they need to be tested, it is likely because they were in a setting where they believe they would have been exposed, and would get tested shortly after that potential exposure,” said Department of Health spokesman Nate Wardle of the two-day window.

If someone who’s tested positive without symptoms discloses they attended a mass gathering outside that window, notification protocols are determined on a case-by-case basis. Factors taken under consideration include whether the event was outdoors, social distancing was maintained and attendees shared or touched the same objects.

But generally, it’s appropriate to issue a press release or some other public notification, if there is no way to contact every attendee directly, according to Wardle.

The state instructs contact tracers to collect names of people who were in close proximity to an infected person — defined as less than six feet of distance — for more than fifteen minutes. During the afternoon and evening of June 2, some voters waited in line and in closer proximity, indoors in a crowded area, for much longer — hours, in some cases — at the Hamilton School, Johnson says.

In the event of possible infection at a polling place, the Pennsylvania Department of State would follow guidelines of the Department of Health, according to DoS spokeswoman Wanda Murren.

But no public notification occurred after Johnson tested positive.

James Garrow, a spokesman for Philadelphia’s health department, said he can’t give details on specific contact tracing efforts. But he confirmed that in cases like Johnson’s, the city does not issue blanket notifications about possible infection risk to large groups of people.

A voter, right, checks in with an election worker before casting her ballot in the Pennsylvania primary in Philadelphia, Tuesday, June 2, 2020.

The city, he said, is still seeing community transmission of the virus, which means that all gatherings — election-related or not — are potentially dangerous.

“There is no public health benefit to highlighting one particular potential exposure event,” he said. “Once cases get low enough to begin contact tracing, we anticipate that widespread public notification of situations where adequate contact tracing cannot take place may happen.”

Philadelphia is still discouraging all gatherings of people, even as the rest of the state has begun allowing up to 25 people to congregate.

Johnson, 49, says she got tested as a precaution because she has a medical condition and was concerned about her own exposure at a voting location where — after consolidations ahead of the primary in response to the pandemic — more than 1,100 voters cast ballots in person.

As the day wore on June 2, she says lines got longer, personal protective equipment supplies (such as hand sanitizer) ran low and social distancing was inconsistent. She spent part of the day outside the polling place, and part standing in a busy hallway outside the voting area.

“The actual room where they had the voting machines and the hallway leading up to that room, there was no chance of being able to social distance,” Johnson says. “Things were not moving as efficiently as they could have been. It was just too many people.”

Garrow, the city health department spokesman, didn’t say how many people are conducting contact tracing in Philadelphia — a report from Spotlight PA recently pegged the number as being around 12 — but noted that 50 new contact tracing staffers are being trained, and “more are being hired as we speak.”

“Once the number of new cases per day gets down to a number the current number of tracers can handle, we would reach out to the positive case and interview them about who they may have exposed,” he said. “Our contact tracing staff would then outreach to those contacts and recommend that they quarantine and check their symptoms daily for 14 days.”

When Johnson first got her positive test, she reached out to city election officials: Commissioner Lisa Deeley and 60th Ward Leader Greg Spearman.

Spearman says he texted other committee people whose divisions voted at Hamilton to let them know someone had tested positive for COVID-19.

“You don’t even know if she got it there, but you still have to take the precautions and notify people,” Spearman said.

Nick Custodio, Deeley’s deputy, says they immediately relayed the information to the city health department, though at that point contact tracers had already reached Johnson.

As the November election approaches and people consider whether to vote in person, Philadelphia’s handling of this situation raises questions about how other public officials across the state plan to respond to potential coronavirus exposure at the polls. 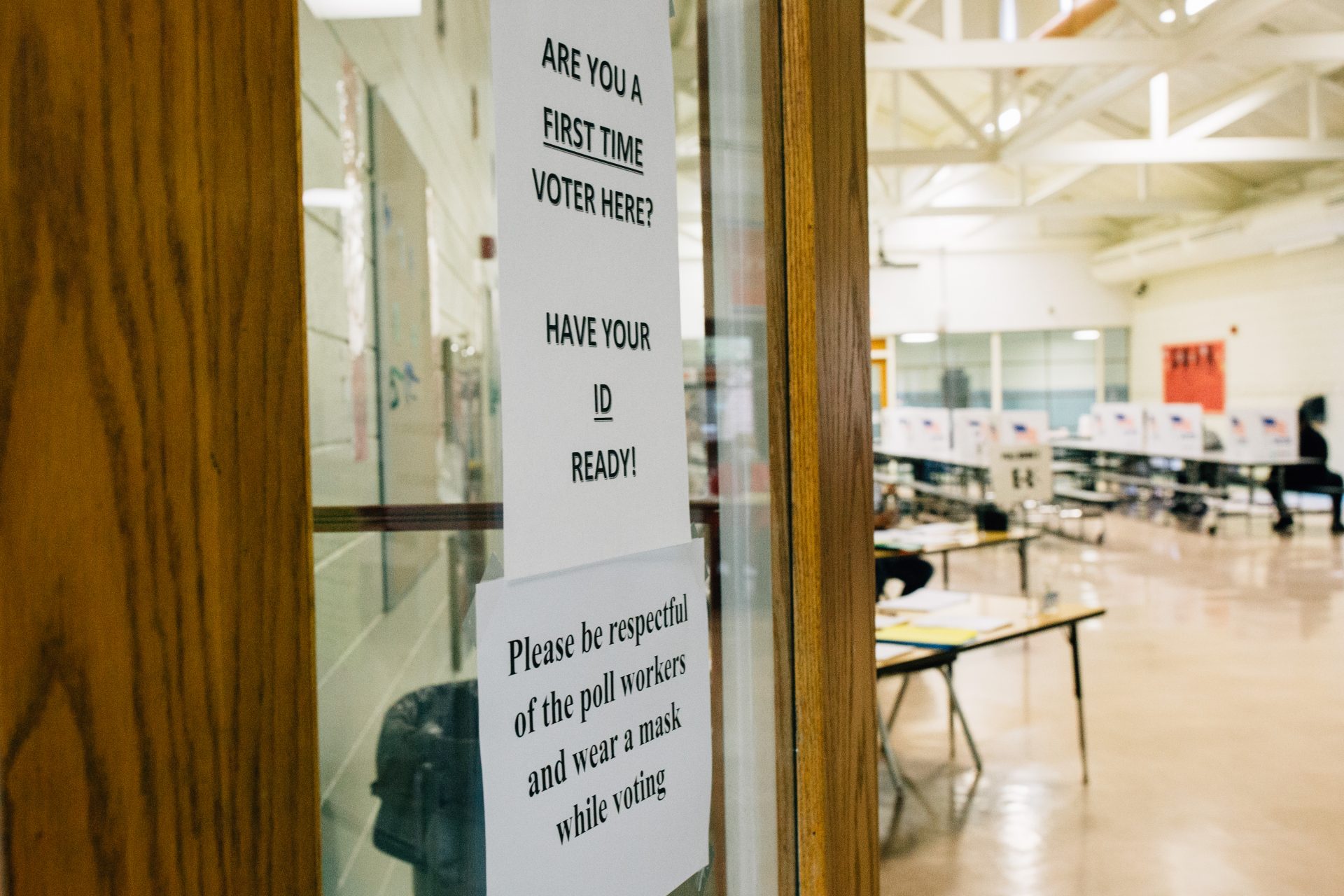 Signs on the door at Susquehanna Township’s 2nd ward at Thomas Holtzman Elementary School in Harrisburg, Pa., for the June 2, 2020, primary. Voters were encouraged to wear masks at polling places across the state to reduce the likelihood of spreading the coronavirus.

Counties’ contact tracing strategies and capabilities vary widely across Pennsylvania, but in general they’re still limited. Counties tend not to notify people of possible exposure unless they are confirmed to have had close, sustained contact with a person who tested positive.

Larry King, a spokesman for Bucks County, said the response there probably wouldn’t look too different from Philadelphia’s — though he couched his answer, saying it’s difficult to guess exactly what Bucks would do without firsthand knowledge of the situation.

King said close contacts, like the eight Johnson specifically named, would likely be interviewed and screened. But he said the county would be unlikely to, for instance, pull the voter rolls and try to contact everyone who voted in the polling place.

He said Bucks County Health Director David Damsker put it this way: “Just because you’re a poll worker doesn’t mean you infected everyone who voted.”

Chester County health officials — who also oversee contact tracing in Delaware County — had a similar response. In a statement, the office said its procedure “includes working with the individual who tested positive, to determine the list of people who came into close contact with him/her and therefore would have had real opportunities to interact in a way that could transmit the virus.”

The officials added that people at polling places who merely passed by someone who ended up testing positive, “with no direct touch or close interaction,” likely would not be included on a contact tracing list. They did not say they’d consider making a public announcement about the infection.

In other jurisdictions in the U.S., health and election workers have handled comparable scenarios differently.

Chicago’s election board sent letters to hundreds of voters and election workers to alert them of confirmed coronavirus cases linked to four polling locations in the city.

In Pennsylvania, those decisions tend to fall to counties.

And almost none of the counties that responded to PA Post and WHYY’s queries reported taking those steps, nor having other plans in place to address potential COVID-19 outbreaks at polling places in November.

But two counties did say they are thinking about that possibility.

One, Snyder, followed up with poll workers after the primary to make sure they hadn’t developed symptoms or tested positive for COVID-19, according to Elections Director Debbie Bilger.

And Centre County Commissioner Michael Pipe says officials there would notify voters about possible exposure at their polling place using contact information in the registration database.

“We can export a list for everybody who voted and send them a letter,” Pipe said. “It would literally be a click of a mouse, it would be a very low threshold.”

But Pipe says state officials need to give clear guidance before Nov. 3. Election security extends beyond the “sanctity of the ballot” and includes people’s health and welfare, too, he says.

“We all appreciate they were moving at a very fast clip and trying to take care of a lot of things [before the primary],” Pipe said. “But we’re going to have this pandemic in November. So, they should really have a very robust program for how they notify people, if they get sick at the polls.”