The center is led by City Councilman Lou Rivera and aims to tackle urban struggles.

York City Councilman Lou Rivera is spearheading a new initiative he says will address the unmet needs of the community.

“We are going to be laser-focused on the people who are typically missed,” Rivera said. “We are in the neighborhood, we will be in the trenches, going door to door to provide for the disenfranchised and most vulnerable with resources lacking in their communities.”

Rivera expects the center to have a ribbon cutting and be fully operational before the end of National Hispanic Heritage Month, which runs from Sept. 15 to Oct. 15.  The organization is in the process of obtaining its nonprofit status, he said.

The center is only around 600 square feet but Rivera said he hopes it will pack a big punch. Rivera says he is already working to bring health information, legal assistance and employment resources such as PA CareerLink to the downtown York location.

Rivera said aside from just referrals, he hopes to have health, legal and employment professionals and temporary staffing agencies regularly visit the center to work with people face-to-face. He also is hoping the center is able to have two full-time employees, two-part time employees, interns and volunteers.

“Economic inequality is the biggest reason our community is vulnerable,” Rivera said.

Around 35 percent of York residents live below the poverty level and the median household income is little more than $30,000, according to U.S. Census estimates.

Community leaders attended the opening, including Pastor Alex Alvarado of Reconciliation Church, of which Rivera is a member. 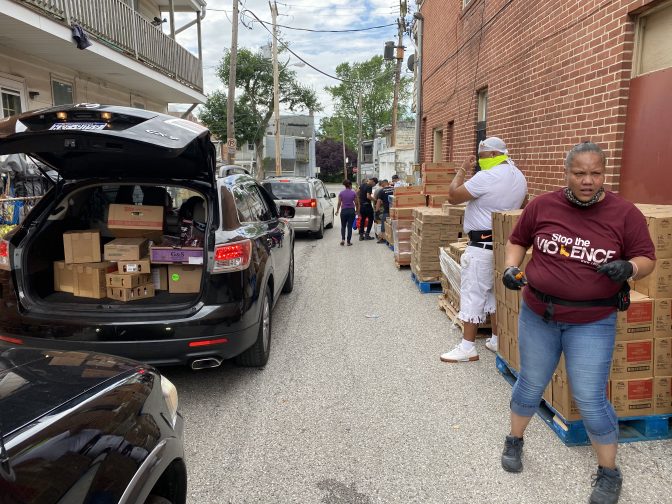 Volunteers load cars with food Thursday for an open house of the new Spanish-American Multicultural Resource Center at 426 S. George Street. The food was a part of an outreach ministry of Reconciliation Church.

Alvarado brought a portion of his church’s weekly food distribution ministry, allowing neighbors to take free produce after learning about the plans of the center.

AliceAnne Frost, York city controller, visited the center as executive director of The Program, “It’s About Change.” The nonprofit is a reentry organization for formerly incarcerated people returning home. Frost said she plans on partnering with the center.

Rivera said the center will try to reach out to more than just Latinos.

Non-white communities make up more than 60 percent of York and Latinos make up 37.5 percent, according to the Census. The center will be a place for York’s Black, Latino and Asian communities, Rivera said.

“I didn’t want it to be a Latino or Hispanic center because the systemic problems we face are bigger than one community,” Rivera told visitors.