A protester with Black Lives Matter Harrisburg takes part in a protest outside Dauphin County Prison on June 30, 2020. Inmates inside the facility could be heard banging on the windows and holding up signs pleading for help. (Kate Landis, PA Post)

In spite of mass releases by counties to allow social distancing, some inmates still remain in solitary-like conditions

Starting on June 27 and continuing for almost a week, protesters with Black Lives Matter and Voice for the Voiceless marched along the perimeter of the Dauphin County Prison in Harrisburg. Among the marchers were mothers, spouses and children of those incarcerated inside.

They each came with their own stories. One woman said her husband hadn’t been getting his medication. A cousin of one inmate said she worried about the lack of clean masks. Another woman said her fiance was exposed to coronavirus but not moved out of his cell, possibly infecting others.

While the group marched up and down the sidewalk outside of the prison, detainees inside banged on the glass, holding up signs pleading for help.

One even placed a call, using a tablet provided to inmates by the jail, to his fiancee, who was standing right outside his window. While talking to her, the inmate waved to direct journalists’ attention to a sign he was holding that said he had diabetes.

A common complaint voiced by the protesters was how their loved ones inside the jail had been dealing with a months-long lockdown that restricted inmates to their cells for all but one or two hours per day.

The solitary-like lockdown policy was initiated early on in the coronavirus crisis at correctional facilities across the state, following the lead of the Pennsylvania state prison system.

Four months later, state prisons have returned to near normal operations, meaning inmates are able to leave their cells for meals, exercise, education, jobs and counseling. County jails, however, are not all following the state’s lead.

PA Post contacted nearly a third of the state’s county jails and found that while the majority of smaller county jails have eased lockdown rules – even, in several cases, allowing inmates to receive visitors – hundreds of inmates and detainees at other jails continue to be kept in their cells. Despite officials in counties claiming lockdowns have ended, inmates held in facilities where they say lockdowns continue include the jail in the state’s largest city, Philadelphia, as well as in Allegheny, Dauphin, Franklin and Lebanon counties.

Prison reform groups and civil rights attorneys say long-term lockdowns are not tenable, posing a significant strain on the mental health of inmates. Most importantly, there isn’t enough evidence that lockdowns are an effective way to stop the spread of coronavirus.

“There is some variation in lockdown conditions – and I think that there are some wardens or superintendents trying to make an effort – but overall, the lockdowns are a problem across the board,” said Su Ming Yeh, executive director for the Pennsylvania Institutional Law Project, which handles civil rights cases on behalf of prisoners and their families. “The prison should be taking precautions to socially distance people, but there are different ways to do that without punitive lockdowns.”

Last month, Yeh’s organization, alongside the American Civil Liberties Union of Pennsylvania, was partially successful in a lawsuit against the City of Philadelphia that challenged the jail’s confining of inmates to their cells for as long as three days, meaning inmates were not allowed to shower or exercise and were required to eat all of their meals in their cells, where they also go to the bathroom. Under a consent order filed on June 3 to resolve the case, the county agreed to work out a way to increase out-of-cell time to 45 minutes each day. 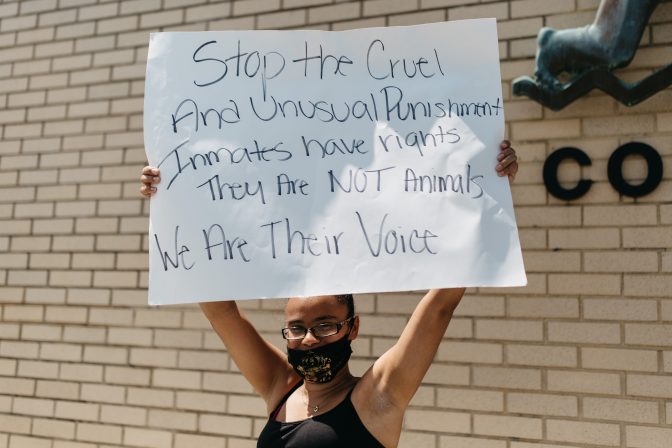 A protester outside the Dauphin County prison on June 30, 2020. Inmates in multiple jails across the state say they’re being held in solitary-like conditions, going on four months. (Kate Landis, PA Post)

From the start, coronavirus lockdown rules varied widely across the state. Some county jails – such as the Adams County Adult Correctional Facility – shuttered their doors to visitors while maintaining regular operations on the inside. Many others allowed only four to eight inmates to be outside of their cells at any time to ensure adequate space for social distancing in common areas.

For most inmates, time outside of their cells ranges between six to eight hours a day, time they can spend in communal areas, exercising or, in some cases, working. But the stricter lockdowns implemented in the face of the coronavirus outbreak made it difficult for jails to comply with the state law that mandates prisoners be allowed at least one hour out of their cells per day — a rule that specifically applies to inmates held in solitary confinement or segregated housing.

Under the lockdowns, inmates’ movements stopped, and in some cases prisoners were kept in their cells for days on end.

Even Department of Corrections Secretary John Wetzel said the conditions weren’t ideal, and medical experts and epidemiologists agreed that prisons would become infection clusters if the state and counties didn’t reduce the prison population quickly. Population data gathered from 31 different jails shows that, altogether, county jails reduced the number of people held by nearly 25 percent. And those counties that reduced their jail populations the most were more likely to go on to lift their inmate lockdown orders.

Cumberland county’s jail released enough inmates that corrections officials have been able to keep operations to normal while abiding by public health guidelines outlined by the Centers for Disease Control and Prevention. “That [population] reduction did help us give an ability to do social distancing, at a minimum,” said Cumberland County Prison Warden Timothy Shenk.

But simply reducing the total population wasn’t enough to bring the coronavirus under control at all county jails. By April 8, early in the crisis, Dauphin County had released almost 250 prisoners, but its prison continues to experience a large number of new coronavirus infections, even as its lockdown continues.

Dauphin County spokesperson Amy Richards said that the prison is only restricting movement in certain housing units where the coronavirus is spreading. Earlier this month, the prison announced a new round of testing showed that a total of 155 inmates and 30 staff had the virus, almost tripling the total number of positive COVID-19 cases from its last testing spree at the end of June.

In Lebanon County, enough prisoners were released to empty out an entire cell block, which was then used for quarantining new prisoners and those with symptoms. Like in Dauphin County, the jail’s lockdown remains in place but coronavirus continues to spread. Last week, four inmates and one staff member tested positive for the virus. As a result, the lockdown policy is still in effect, meaning inmates remain in their cells for, on average, 22 hours a day, according to Jamie Wolgemuth, spokesperson for the county commissioners’ office.

And tensions are running high, with lockdowns and close confinement threatening the mental health of prisoners. In Franklin County, where inmates are allowed to leave their cells for three hours each day, inmates told PA Post about a fight that broke out between an inmate and a corrections officer who had ordered prisoners back into their cells.

“My son has a sentence to serve, but my son is not an animal.”

Researchers at the Vera Institute of Justice and the Pennsylvania Prison Society have been attempting to collect data on the total number of positive coronavirus cases in county jails, hoping to measure the effectiveness of lockdowns and other coronavirus mitigation efforts. But that effort has been hampered by local officials withholding information and the lack of state oversight to force counties to make their numbers public, says Claire Shubik Richards, executive director for the society.

“These are facilities that are funded by Pennsylvania taxpayer money and are responsible for the custody and safety of Pennsylvanians [but] won’t report out basic information,” she said.

Shubik-Richards argued that the state needs to offer more guidance to county jails, similar to how it’s working with nursing homes, another major cluster for infections. She said the society asked the Departments of Corrections and Health to step in to help gather the numbers, but neither agency took action.

For their part, state officials say they lack the authority to tell counties how to handle the coronavirus epidemic inside their jails. When asked why infection numbers and testing numbers at county jails weren’t being published similar to nursing home infections, Health Department spokesperson Nate Wardle said it wasn’t the department’s job to oversee county jails.

County corrections officials, while noting that they do follow some recommendations from state agencies, insisted that, ultimately, the decision to test, quarantine or decarcerate would be made locally.

Shubik-Richards says that it’s untenable to let counties continue to make their own decisions without firmer state guidance, especially on reporting data on new infections.

All the while, families of those in county prisons say they are increasingly worried.

Dawnielle Chisholm, whose son is being held in Dauphin County Prison, stood outside the jail during one of the Black Lives Matter protests on July 2 and explained how much she worried for his life. “My son has a sentence to serve, but my son is not an animal.”